The Furies will stage their newest work, Nasty Womxn, at the Alexander Bar’s Upstairs Theatre this October and November, with previews starting Monday, 30 October. The official run will commence on Monday, 6 November until Tuesday 14 November, 2017. 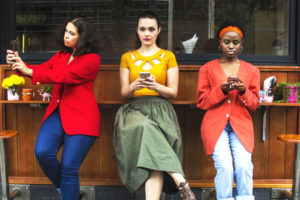 Nasty Womxn is what you get when you mix Greek mythology, reality TV, gold spray paint, and a writer with no filter. Drawing on the Greek mythologies of Persephone, Medusa, and other not-so-well-known characters, Nasty Womxn is a collection of sketches about contemporary womxn just trying to get from one day to the next.

This work by The Furies – a collective whose focus is creating space and increasing opportunities for marginalised womxn – plays with Greek mythology’s tendency to turn strong women into monsters, and celebrates all the different types of monsters we become to survive.

If you really love Greek mythology, the old Divas of WWE or trashing other womxn, then this is probably not the play for you. But if you love the Kardashians, candid CNN interviews, gold (everywhere), spelling womxn with an ‘x’, and smashing the patriarchy one rape-culture-drenched mythological origin story at a time, this might just be your cup of tea. Written and directed by Dara Beth, Nasty Womxn stars Kathleen Stephens, Masali Baduza and Maria Vos.

Where and when: Alexander Upstairs from 30 October to 14 November, 2017