Hatton Garden, the four-part series that starts on ITV Choice on 24 July 2019, is based on the true story of four elderly men who pulled off an audacious nighttime raid of an underground vault in London, stealing millions of pounds worth of jewellery and cash over the Easter weekend in 2015. 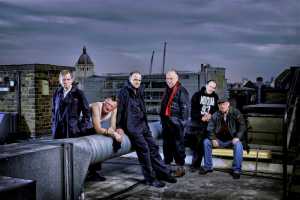 Timothy Spall stars as the gang’s ringleader Terry Perkins, a 67-year-old diabetic career criminal doing one last job before his retirement. One of Britain’s best-known actors, Spall is most famous for his starring role in Harry Potter and the Deathly Hallows.

Speaking about the show, Spall said: “They are not lovable rogues. They are criminals. And as we all know, criminality requires ruthlessness. That’s a given part of the chosen profession.” Spall has also revealed that the role was “bloody gruelling”.

“The filmmakers recreated the vault in the studio and in filming our story you realised these were old blokes working very hard in what was very difficult, physical, skilled engineering. So when we got down to filming the work, you realise how hard it was. No wonder my character and the others were exhausted. They were old.

“You really got a sense of how difficult it was to drill through concrete with one of those diamond drills. It was a bit like being involved with some bizarre engineering feat. It was bloody gruelling. We were running up and down stairways at 3am. Some of it was a bit challenging. But we always had somebody standing by with a cup of tea and a chair. Unlike most people who do that sort of thing.”

Sticking closely to the real thing

Originally due to air in the UK in December 2017, the series was put on hold after prosecutors advised that it would clash with the trial, and re-scheduled for a second time following the trial of final suspect Michael Seed who was convicted in March this year.

Hatton Garden was written by Bafta-winning screenwriter Jeff Pope, who was responsible for the series about the murder of Rhys Jones, Little Boy Blue (shown on ITV Choice in 2018). 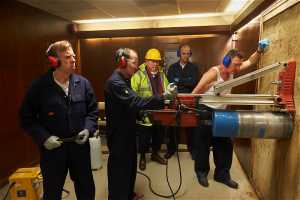 Pope and the cast visited the real Hatton Garden vault during the series, with the screenwriter adding it “takes your breath away” that the group managed to pull it off.

“We visited the real vault and looked through the holes that were drilled, which were phenomenally small. We use exactly the same dimensions in the drama. The hole our two actors went through, in terms of the two gang members who went into the vault, is the exact size of the hole in the real vault and my goodness it was a struggle for them to get through it.”