NICE COAT. Soli Philander at the Golden Arrow Studio at The Baxter. 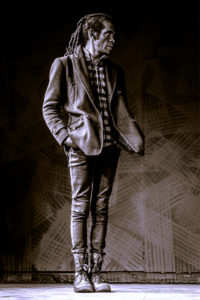 Watching Soli Philander and listening to him for an hour and fifteen minutes tonight was transformative. Nice Coat, penned by Soli and then expressed by him on stage, in front of us, is an immersive experience. And I left feeling charged, inspired, raging and glorious because of it and him.

Soli is a writer/poet, performer and activist as he takes you on his personal tour of Cape Town, its spaces and people, its history and quirks, its languages and its great divides, its politics and its pain and laughter.

There is music, madness and sanity in every word and syllable of what is essentially a love poem in rhyming couplets; a poem that takes us around the mountain and back again, down to the beaches, into the ‘gat’ or dungeon of the Castle, through the white suburbs of the City Bowl and Atlantic Seaboard down to the Cape Flats and the pure black townships of Langa, Nyanga, Imizamo Yethu and Khayelitsha. It is a poem that spans the distance, in swimming strokes and great whites, from Robben Island to Bloubergstrand.

Clever, heartfelt words about our town, our Cape Town

It is a poem that nods to the buildings; the high rises on the foreshore that trap the wind, the old and hilarious Labia and Mount Nelson, the malls that span the length and breadth of the city and provide our greatest sport and leisure – shopping. It is a poem that greets in 13 languages and teases them all. It is a poem filled with burning arrows directed at those who sit in their white privilege, those who do nothing but complain, those who remain disengaged. 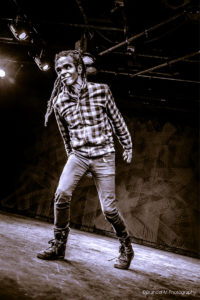 This skinny man, with his waist long dreads and his smile that can turn from coquette to critic, and his deep brown skin, held us, shook us, jiggled us and frightened us, with his clever, heartfelt words, about our town, our Cape Town.

Soli is mercurial and precise, rambling and funny, charming and seductive and icily critical. His perceptions are from direct experience, detailed observations, an abiding love and a fierce sense of justice. If you are a Capetonian you cannot afford to miss this, and if you are a visitor it will help you understand.

I love Soli. I love Soli as a performer, as a particular and vital voice of Cape Town, as an original writer, and I wish he was our mayor. Soli for mayor.

Where and when: Baxter Theatre from 17 to 29 July