Jazz in the Native Yards presents an ode to the youth with the exciting Nobuhle Ashanti Trio led by pianist Nobuhle Mazinyane in a livestreaming concert on 19 September at 7pm from the Penny Lane Studios. Talented drummer Tefo Mahola and bassist Sean Sanby are featured as part of the trio. 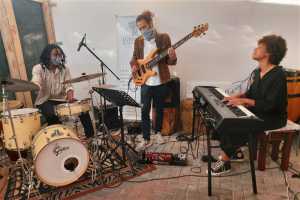 Supported by Concerts SA, this concert is in collaboration with The Gugulethu-Seaboard CAN Partnership, one of Cape Town’s first inter-neighbourhood responses to the pandemic.

Five percent of ticket sales will be donated to The Gugulethu-Seaboard CAN which has supported 2000 highly vulnerable households in Gugulethu through food vouchers, pop-up soup kitchens, community gardens, and the delivery of water, soap and protective gear. The Nobuhle Ashanti Trio will perform live from Penny Lane Studio with Covid-19 regulations strictly observed.

Since the age of 13, Nobuhle has been actively involved in musical training and performances around Cape Town with various programs and ensembles such as The Little Giants, Beau Soleil Music Center and Sekunjalo Edujazz Program.
Her composition and performance style consist of various and different influences, namely SA jazz and R&B soul. Performing consistently around Cape Town with her project, Ashanti Tribe, Nobuhle is a seasoned performer who hopes to deliver meaningful, beautiful music within each performance.

Tefo Mahola, also known as “Talking Drum”, is an emerging multi-talented drummer, pianist, arranger, composer and poet hailing from Gugulethu, Cape Town. His  career has barely started, but he has already played with great musicians in festivals and tours including Rocking the Daisies, Cape Town Jazz Festival, Oslo Jazz Festival and Muizenberg Jazz Festival to name but a few.

Sean Sanby has been performing on the Cape Town jazz scene for a number of years. His passion for music started at school performing in many bands and across many genres. He completed a degree in Jazz Performance at SACM (UCT) studying under Hein Van de Geyn (NL) and Shaun Johannes (SA). Sean has just completed an 18-month international tour as part of the Matilda the Musical band and returned to Cape Town in 2020 to release his debut album Out of the Candlelight.