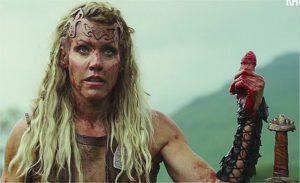 The series is set in the village of Norheim around 790. What’s nice is that the lead roles tend to be swapped around, with different characters stepping forward depending on the narrative. Ah, those Norwegians, so naturally socialist.

The story concerns itself with the day-to-day issues affecting your average Viking neighbourhood. There’s concern over the quality of raiding and pillaging, bickering over who is actually chief, a fake pregnancy, an institutionalised slave and a baddy who looks like Nataniël, just for starters. As the series develops we learn about prosthetics circa 790, and the legalities of homosexuality amongst Vikings.

There’re lots of mini-plots going on all the time, allowing a core team of actors to develop their characters – Kåre Conradi as the hapless and sexually confused Orm; Nils Jørgen Kaalstad as the fat, friendly warrior Olav who everybody wants as the real chief; Jon Øigarden as the Slytherinish Jarl Varg; and Silje Torp as Frøya, who looks like she should be in a women’s smackdown final. Then of course there’s ex-slave Rufus (Trond Fausa) who becomes Creative Director of the village, and Liv (Kristine Riis) who has a thing for powerful men.

It’s crusty, it’s messy, it’s hilarious and it’s sometimes shocking, and Season 2 has just been released on Netflix with some truly up-to-date references (“Let’s make Norheim great again,” says Orm at one stage.). Season 3 has already been promised, and I can’t wait to see what the men in plaits get up to next time around.

While the offbeat sense of humour was a surprise at first, in retrospect it shouldn’t have been. A country that has delivered the genius of Ylvis should never be underestimated …