I have just come back from the opening night of Oleanna at The Fugard Theatre and I have more thoughts than I should have flying through my brain. There are so many disclaimers I need to make up front before I get into the meat of it. This may be a long ramble; a spew, a confession, a revelation, a theatre rant and a diatribe. Forgive me. 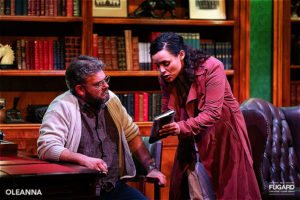 Disclaimer: Oleanna is one of my favourite plays. I have directed a staged reading of it. I know most of it off by heart. I have visualised productions of it. I have seen three versions of it.

Oleanna is David Mamet’s dissection of college education, patriarchy, sexual harassment, white privilege, miscommunication, ego, and power. All of this in three scenes between a student and a professor. First performed in 1992, Oleanna moved virally through the world, with performances everywhere, shattering audiences and dividing them in opinion and emotion.  Mamet was prescient. He could have been talking about here and now.

There were always going to be two groups of people in the theatre tonight; those that knew the play and had certain expectations (like me), and those who knew nothing and would be shocked.

I was both excited and filled with nerves about this production. I last saw Alan Committie in his delicious one-man stand-up (which I adored) and was curious about how he would make the transition to straight and deep theatre. Both Committie and Fortuin are impressive. They are in turns magnetic, powerful, emotional and deeply committed to both their characters and the journey of the play.

But, for me, this wasn’t enough. I heard Alan on the radio yesterday saying that they had had three weeks to rehearse. I think, for Mamet – his dialogue, his poetry, his dissonance, his drama – three weeks isn’t enough. I would have loved a lot more detail in the execution of the piece.

What makes this piece so totally relevant, is its context. This student-professor relationship is one that is taking place in offices and rooms all over South Africa, and the resonance is powerful. But bold choices need to be made. These are complex and terrible people, in an utterly frightening situation. I am not sure we got to the balls of it here. 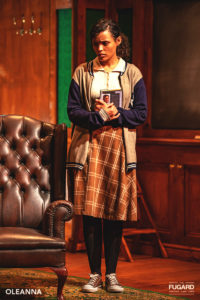 One of the huge challenges of putting a piece of this age on stage is a question of interpretation. In 1992 we were comfortable with sets, costumes, styles of performance being very literal. Almost twenty years later, we expect a more theatrical resolution for the visual, the sound, the creative elements.

Ultimately, this production was a little like its glamorous but unimaginative set; solid, temperate, literal. And it was a pity. Both Alan Committie and Nicole Fortuin have the potential to blow us away.

Which isn’t to say that it won’t blow away those who are unfamiliar with it. It is just to say that I have very, very high expectations.

Where and when: Fugard Theatre from 14 September 2018

Note: Oleanna carries an age restriction of 16 for mature content and violence. Themes and content of sexual harassment and violence against women are prevalent at certain times in the play. These could be triggering to some audience members. If you would like more information about the content of this production please contact us on info@thefugard.com