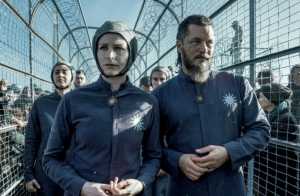 I waited for this series with high hopes. Shot in Cape Town, and with the involvement of Ridley and Luke Scott who directed some of the episodes, as well as it being one of my favourite genres – sci-fi – I was very excited. I willed it to be good. I wanted it to be. But I struggled to stay engaged after the second episode and then had to make myself watch the rest, motivated by the good performances of the South Africans in it (Susan Danford has a proper role and is pretty good) and the familiar but transformed Cape Town setting.

The storyline is begged and borrowed. Humans have messed up Earth again. There have been wars between the science-driven atheists and the religious maniacs. Androids are caught in the middle, serving both armies. A pre-programmed set of ‘mother’ and ‘father’ androids is sent to a barely hospitable planet with a clutch of kids and a mission to raise them. All but one of them die. Then the planet is crash-landed by the religious and their new clutch of kids, but one couple of them are pretend-religious. It’s complicated. Then the war on the inhospitable planet takes place again, with the long-suffering androids really coming off second best, over and over again. And then there is the final deux-ex-machina of the alien monster as series cliff hanger.

This show should be subtitled Toxic Men and the Women and Androids that Serve Them. From the rapist on board the ship who impregnates a teenage child while she is asleep in suspended animation, to the bizarre and uncomfortable android sex sim with her creator, the devoted husband who turns abusive and violent, and even the father android who becomes jealous of mother android’s powers and then her fantasies.

It’s pretty grim. And mother is long suffering. The list of her abuse is endless. Her final exploitation is tantamount to rape during a war. Mankind comes off as a species incapable of growing and learning. Same old violence and brutality regardless of time or place. It’s unpalatable.

Then there is the acting. I know there is not much an actor can do with trite and flimsy dialogue and none of them manage to overcome it. The villains are villainous. The goodies are borderline pathetic, and then there is a host of hideous and soppy acting from the kids. They are teeth grindingly terrible.

What saves this series is the exquisite other worldliness of the set and location. The Cape Town landscape, though entirely recognisable to a local, is transformed to be creepy and hostile. It is fantastic. The brilliant combination of real location and CGI is fantastic too. The massive pits, the dunes, the misty mountains, the rocky outcrops, the strange forests, and the gorgeously built structures are incredible.

This 10-part series is getting a second season. I can’t say I care about what happens next. It’s just too bleak and abusive for me.

What: Raised by Wolves