Red Soil/Brown Soil was a collaborative offering at the NAF which OLEANDER CAIRNS found to be a “lovely, strange, circling offering” in her review: 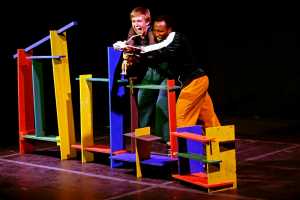 Red Soil/Brown Soil began with the two performers, Billy Langa and Livia Hiselius, on stage. The piece, directed by Mahlatsi Mokgonyana and Ragni Halle, was marketed as “an intercontinental and interdisciplinary performance” which combined Scandinavian and South African theatre-making to “explore the relationship we have to the land we walk on”. Langa kicked off the dialogue by saying: “Home. A complicated concept,” before posing that classic South African question: “Wheresit?” I expected something much more literal and pointedly political to follow, but the work approached these urgent questions obliquely.

It was a play, both in the sense of being theatrical and of being ludic. The set consisted of several brightly painted wooden constructions, like cubist jungle gyms. During the hour-long performance, the actors operated puppets with animal skulls for heads, jogged, told stories, pushed one another around the room, and danced with endearingly little restraint. The uninhibited physicality of the work was almost childlike, particularly on Hiselius’ part, and driven by great energy. At the same time, the quiet regard they had for one another was palpable. In contrast to the very physical aspects of the theatre, there were some abstract elements too, including conversational discussion of dreams, and some disorientating, overlapping voiceovers.

There was a section of simultaneous narration that I found particularly effective. Each actor told a story about growing up. One was about living in the police barracks in Sophiatown, and the horror of falling into a burning rubbish pit while playing. The other spoke of ice-cream thievery in a small Scandinavian town, and getting impaled on a fence in the process. The coordination of movement served to unite the stories even while the actors spoke over one another. It was a skilful way to encapsulate the similarities in experience the world over, as well as the marked differences histories of land make to our lives.

Near the start of Red Soil/Brown Soil, the actors handed out a series of their possessions and asked the audience to help with the show by holding them. Some things were very special, some not special at all: a love letter, a pair of 3D glasses, a broken part of the wooden constructions, pills for period pains, some lipstick which wasn’t Hiselius’ colour. I ended up clutching a slightly sticky bottle of “Lavanda” oil for the duration of the piece. At the end, the performers retrieved the objects, placed them in a box, and said no more. This was emblematic of the broader style of the work, which was full of gestures that felt both meaningful and opaque. The result was a lovely, strange, circling offering.