Dwayne Johnson’s beefy arms, Zac Efron’s ripped abs and plenty of dazzling, toothy grins – really, what more could you possibly want from a movie on the big screen.

Plus, wow. Priyanka Chopra’s wardrobe is amazing, and she looks absolutely gorgeous in every shot. 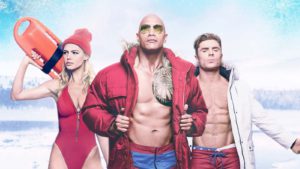 And yes, well. That’s it. That is what this film is about – perving at beautiful bodies. What more could you want? An intriguing storyline, interesting characterisation, or how about a plot that doesn’t telegraph itself from the beginning?

Chopra plays the villain, a businesswoman running drugs through her waterside club and Johnson and Efron are the two lifeguards who stand in her way.

Johnson plays Mitch Buchannon (bit of a nod to David Hasselhof, who makes a cameo), a by the book lifeguard who takes his job seriously. He is forced to work with Olympic swimmer Matt Brody (Efron) who is on the beach to do community service and not interested in anything other than keeping his head down.

However, even all the gorgeous eye candy cannot detract from the fact that this film is not as fun as the TV series. The usually charming cast flounder under the weight of the raunchy jokes. Gone is the campy fun of the TV series and instead it is lowbrow dick  and boob jokes for a heavy age restriction with little payoff.

Never usually one to suggest toning down a film, I have to nonetheless wonder whether this movie would not have appealed to a bigger audience if they had cut down on the raunch and hit a PG rating.

Many of the people who used to watch Baywatch back in the day and would be nostalgic for a blast from the past, are parents in need of family-oriented entertainment.

The idea of lifeguards who do more than just save people from drowning is sweet and this film’s particular storyline could easily have been fleshed out without having to go the R rated route.

There is a measure of self-aware lampooning going on, especially from Efron and Johnson, with a recurring joke about the many slo-mo shots seeing most of the actors break the fourth wall at some point. But, these moments are sporadic, with the comedy reverting back to the smuttiness that passes for innuendo in Hollywood comedies.

Comedy films leave space for laughter to occur – when the noisy audience might drown out the dialogue – but the guffaws were few and far between.