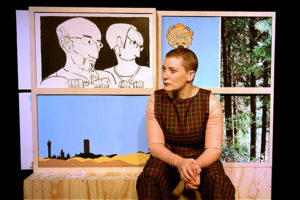 Last night I did something unusual. I went to see a show for the second time. It was Jemma Kahn’s In bocca al lupo, on for another short run at The Alexander Bar. I remembered having such a strong reaction to this piece the first time I saw it, and I wanted to see if I would feel the same. That first time had been one of those rare moments where I was professionally jealous of the work she had made, combined with a deep and restless heart connection to the content, awe at the execution, total vulnerability from the emotions it stirred up and tight-bellied from laughing.

In bocca al luppo is a one-person epic personal journey told through soundscape, places, poetry, art and feeling, through the medium of kamishibai; an ancient Japanese picture storytelling form. It is Jemma’s story of how she ended up being here, on stage, doing this, and it is familial, theatrical, sexy, sad, heart breaking, whimsical and hilarious.

Jemma starts her story at a chosen point in time, at a strange outdoor concert in Japan, travels back to when her Jewish grandmother seduced a tall Italian on a ship in the 1950’s, forward and back to what to do after drama school, to teaching English in horrifying Japan, to being in love with the Irish thief, and much, much more. It is the surprising, sad and wonderful story of how she became. 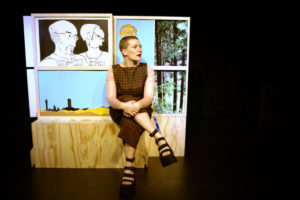 Jemma uses four boxes of pictures to tell this story, and the fluent revealing of images in precise and mesmerising order is mind boggling. Her drawings and paintings have their own personality, and characters, colours, themes and jokes are revealed, hidden, return and reappear. This is matched by Jemma’s voice; my favourite story telling voice, with control and diction and a slight, almost imperceptible Jo’burg sound to her memories. She makes a perfect Irish accent and gives the warmest tones to skype conversations that carry the sadness of family stuff. Jemma puts so much into her voice. She is self-deprecating and critical, defenceless and innocent, complicated and wry.

Each moment of this brilliantly crafted story told in picture and body and voice feels like it has been specially chosen, carefully chosen. And then the moments are put in the space and left there, for us to feel, before joining each other in a picture with words and feeling. In the mouth of wolves.

If you haven’t seen it yet you absolutely should. Be very focussed about getting there. If you miss it your life will always be emptier.

What: In bocca al lupo

Where and when: Alexander Bar/Theatre from 26 February to 10 March 2018