This sequel to the very successful introduction of the Guardians of the Galaxy gives us more of the same fun – dazzling CGI, funny one-liners and a simply adorable Groot.

In fact, baby Groot (voiced by Vin Diesel) just about steals every scene he is in, despite still not having expanded his vocabulary.

The film dives right into the action since we got the set-up of characters in the first film, and while it doesn’t seem quite as awe-inspiringly fresh as the first (because that was just such a total surprise) it is still great fun. It keeps you watching because the jokes are funny, the characters are cool and it has an emotional heart that beats steadily (as opposed to leaking lumpy custard… which could have been its fate if we didn’t care about the characters, but we do).

Like its predecessor, Guardians of the Galaxy 2 emphasises the concept of family, with Peter Quill/Starlord (Pratt) making contact with his father.

Anyone with a passing knowledge of the Guardian of the Galaxy comic books knows the Starlord’s dad is actually a planet and Kurt Russell plays the Ego character with just the right amount of swagger and disdain for humanity.

The flashback scenes where younger Ego romances the Starlord’s mother (Laura Haddock) were apparently achieved with more make-up than CGI and the smooth-faced Russell from his Snake Plissken days helps to reinforce the 80s feel of the film.

Of course, the 80s feel is greatly enhanced by Quill’s mixtape volume 2 which forms just as important a plot point as the music did in the first film. 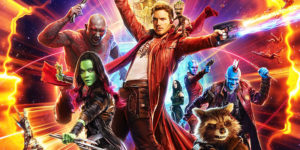 The colours of Ego’s heavily patterned palace walls also riff off the colours used in 80s comic books. The opening sequence battle also screams 80s comic books, as do High Priestess Ayesha’s (Debicki) golden minions. Plus there are some great cameos of our 80s screen heroes to look out for.

Nebula (GIllan) puts in an appearance, still trying to kill her green-skinned sister Gamora (Saldana) and the two characters actually help the film, if not pass the Bechdel test, at the very least get very close – they talk about their father quite a bit which helps to situate the film in the Marvel Cinematic Universe.

Plus, one of the 5 (yes, five!) mid-credit scenes finally reveals the presence of the person who will find the last missing Infinity Stone.

But to get back to this family theme. The part of the storyline that will bring a lump to your throat is Rocket’s (voiced by Bradley Cooper) determined attempts to push everyone away, because he doesn’t believe he deserves to be part of a family. It is a surprise who actually rubs his cute little raccoon nose in this nugget of information and how he, if not resolves it, makes his peace with his own behaviour. Cue the ‘Aw Shucks’ moment … which doesn’t last long because then Drax (Bautista) makes a terrible joke, and we can move on from the lump in your throat.

But still, this is what works about a film which makes you care about a murderous raccoon who is only outdone in homicidal tendencies by a tiny walking, talking tree. Filmmaker James Gunn gives his characters space to grow emotionally and the audience cannot help but empathise with the mismatched heroes attempts to create their own little nuclear family when the entire galaxy seems intent on alienating them.