Last night I watched a man being murdered. I also saw a ghost child carrying a pair of creepy baby shoes, and a bald man extract magic fluid from a boy’s heart. 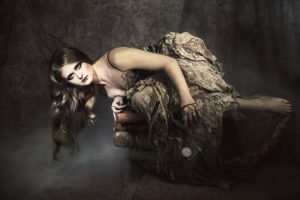 At least, I think that’s what I saw. But the 30-odd people with me may have experienced something else. It all depended on what angle you were standing at, what room you were in, what time you rounded a corner. Immersive theatre – where you are a part of the proceedings, and where you can create your own narrative – allows multi-level interpretations of multiple scenes as the barrier between audience and actor is broken down and the proscenium arch is scrapped. It’s been happening for a while now, in cities like London and New York, but Immortal is the first full-on production in Cape Town. And it’s an impressive, thrilling and unsettling encounter.

Produced, written and directed by Joshua G. Ackerman, who says he was inspired by several immersive theatre productions he saw abroad, the show takes place in a venue already haunted by centuries of history, the Castle of Good Hope. Although “show” is not the right word, implying a passive event with a compliant audience. Immortal requires physical and emotional effort on the part of ticket-holders, and a willingness to step into a 3D environment where the action impacts many senses – sight, sound and even smell.  You are an active witness, even a detective of sorts, as you can examine all that surrounds you – touching, reading, picking up and putting down – in pursuit of your own story.

The one-hour journey begins in a small atmospheric entrance room, where you are told where you can go and what you can do, and most importantly, to suspend your daytime preoccupations and enter an entirely different world. From there, three stories of a section of the Castle become a sensory playground where you can wonder upstairs and down, from room to room, following a cast of actors who sometimes work together and sometimes break off to perform solo activities. You can choose who or what you want to watch – the woman in the white dress, facing a dusty midden of broken teacups; the three ethereal dancers with their sibilant, scary hisses; the boy in the bedroom, grabbing a precious photograph. By the costumes and props, the production hints at a period about two hundred years ago. Maybe. But the thick-walled warren of rooms within the Castle hint at older secrets, painful memories, mysterious charms. And here is where the true wonder of the production is revealed. 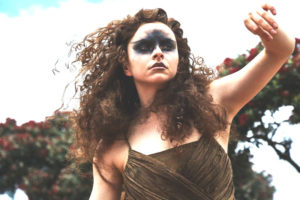 Thirteen rooms have been transformed into experiental spaces, where props, lighting, sounds and even scents are used to create an all-round effect. These are art installations, every chamber, and it’s tempting to simply sit down on the floor and soak each one in. Except there is so much happening that you are simply too curious. Although I did find myself drawn to several rooms more than once – the space where a circle of shoes were laid out neatly in pairs, all drawn together with red twine; the sand-covered section dominated by a huge and disconcerting hourglass; the passage of shattered mirrors; the cage of time.

All the while the actors pursued their agenda; and in some strange manner the majority of us found ourselves in the same room for the final act. An hour had passed in what felt like a minute, and it was strange to exchange the hidden chambers for the outside air. When I left, I had a story in my head – but I’m sure it was not the same as anybody else’s. 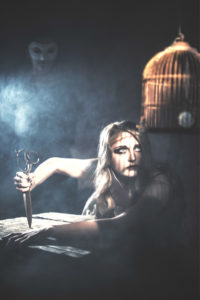 When I read up on immersive theatre, a particular British company kept on being mentioned called Punchdrunk. They’ve been doing this sort of thing since 2000, with productions ranging from an adaptation of Marat/Sade to an operatic version of The Duchess of Malfi to a modification of Macbeth, all in extraordinary venues such as the abandoned tunnels beneath London’s Waterloo Station, or a derelict five storey archive building. Immortal, with its participative theme, well-thought-out execution and awe-inspiring setting, is a worthy addition to the ranks of immersive theatre.

All kudos to Ackerman for conceptualising this production, and for making it happen on such a beautiful, professional scale. And here his team has to be singled out, most specifically Nicola Mayer for her set design and Chris Lotz for lighting. But they all, from the actors to the choreographer, have produced something really different, really special. And Cape Town is the richer for it. Do immerse yourself – you won’t regret it.

[Note: You really need to wear comfortable shoes, as you are on your feet for about an hour. There are a few steep-ish staircases. And the venue is not wheelchair friendly.]