It has taken me a while to see this production and I am so glad I finally did. You only have three more chances and you don’t want to miss it. 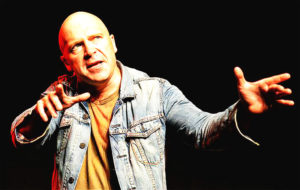 Johnny Boskak is Greig Coetzee’s “wit ou”, broken by the army, directionless and empty, with a desperation that is only relieved by an affair with a dangerous woman.

This one man epic poem, powerfully performed by Craig Morris, is an extraordinary period piece, love story, history, tragedy, road trip, and it took me back to my own stuff from that time, where my friends came back from Angola with shakes and marijuana addictions, wrote poems in bars, got into fights, drove their cars into walls on Sylvia’s Pass in Jo’burg, or shot at street light ghosts on rainy nights.

I love Greig’s slang, and his old South Africa that sits so squarely with the way I grew up and when. And Craig brings this piece to life with his magnetic, charming and darkly threatening power.

This one hour of pure theatre will transport you with every rhyme, movement, character and emotion. It is a riveting story, brilliantly told.

What: Johnny Boskak is Feeling Funny
Where, when: Alexander Bar and Theatre, 1, 2 December, 2017
Book: Here

Below: WeekendSpecial reviewer TRACEY SAUNDERS saw the show earlier this year, and this was her review: At the end of a war there are no winners, just degrees of losers, and Johnny Boskak is a high stakes loser. It is post 1994. The young white men turned soldiers have returned to a world in which they are not welcome. Meet Johnny Boskak, an anti-hero who can’t outrun his past and has no directions for the future. He is “a disgrace to the Rainbow nation / On the side of perpetration / a white trash apartheid abomination.” His life no longer rhymes and he hits the road in search of something bigger than him which makes him feel less small. But first “a man has to face the dark before he faces the devil” and as you join him on his journey you become completely invested in the search. From the outset he has no illusion about his failings and his frank disclosure of his time in the army is told with bitter rancour. We are given a glimpse in to the mind of a man who walks the streets “half man, half bomb.” The notion of an internal explosive device waiting to explode is used as he unpacks familiar tropes of masculinity with an acknowledgement that he is a disaster waiting to happen.

Remarkable things about this production

There are several remarkable things about this production. Craig Morris himself is a consummate physical performer. When he is involved in a motor vehicle accident we gasp as we watch him fly through the air and flinch when he hits the tarmac. He executes grand physical scenes well but it is at the small gestures that he is a master – the opening flick of a lighter, the heavy draw of a cigarette, the deep drink from a bottle are all executed with the languid precision of a slow motion movie.

This is a one man show but the appearance of several characters takes you by surprise. The army officer spews hatred, eyes ablaze with sadistic cruelty. A short while later an alluring seductive woman strokes a pool cue with hypnotic grace. His transition between these characters is flawless. He meets and is “the devil and the lord / both drive cars he cannot afford.” The vignette where the two banter about the future of Johnny’s soul is worth the cost of admission alone. His encounter with two unlikeable (to be charitable) brothers in a bar is a master-class in characterisation. The revulsion at the sexist pair is immediate as Morris creates them with a curl of the lip and a snarl.

Throughout the sixty minutes of rhyming couplets he doesn’t miss a beat. He is comfortable enough in the silent moments which allow you a moment to absorb the lyrical beauty of the text. Coetzee’s script after all these years has lost none of its relevance. The young men, both black and white that we encounter are forgotten by the ruling regime, unemployed and hopeless. The class divide and the personal quest for meaning are timeless themes. He is unafraid of the diversity of South Africa’s languages and embraces every strand; army slang, Afrikaans colloquialisms and tsotsitaal, all are woven together with an entrancing rhythm. 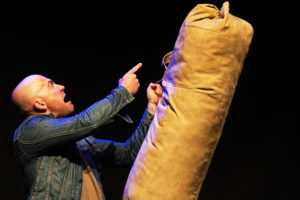 Harsh reality of a country that was at war with itself

Profanities are uttered with a guttural desperation that give them a meaning far greater than mere shock value. Without a trace of sentimentality he shows the harsh reality of a country that was at war with itself. Without resorting to revisionism and with not an iota of nostalgia he shows the dehumanizing of young men sent to ‘Nam (that’s Namibia) with the same distorted sense of nationalism as any American soldier sent to that other Nam. Johnny’s escape from his past and a search for a place in the world is broader than an individual identity crisis. His quest mirrors that of a sector of the population trying to find itself. There is a political narrative which is underscored by his personal tale. While not looking for love he finds “lady luck is a girl named Eve” and consumed by lust, driven by desire he begins another mission. The Bonny and Clyde romance for a Natural Born Killers generation unfolds at a blistering pace as it tells the story about the redemptive power of love and the all consuming nature of revenge.

A country that the travel guides miss

The simple set of the familiar yellow and black armco barrier transports you to the side of life’s highway. The only prop, a standard issue khaki balsak. The kitbag is a comfort and a burden and serves as a proxy for his lover and his enemy, a place to lay his head or absorb a well-aimed kick. In addition to sketching characters he paints the country with phrases so vivid you can smell it – the dry dust outside Bloemfontein, the tacky tomato sauce in a roadside diner and the lush verdant green of the Natal valleys.

His road trip sketches a South Africa under “sun infested rays” and the small towns with quirky differences and a mind numbing sameness appear like magic on the stage. He evokes images of those vast open plains “where the sky is high and heaven leans” to the mean streets of Hillbrow where there are “a few white lines and a lot of black tar.” From the shabbiness of Port Shepstone and the rough Bluff in Durban to the flame spewing Secunda he shows us a country that the travel guides miss.

When I first encountered Johnny at the National Arts Festival in Grahamstown in 2015 I entered the theatre with some scepticism. How entertaining could a one man show about a white man in post apartheid South Africa possibly be? Within five minutes Morris had me in the palm of his hand and when he relinquished his grip an hour later I was a believer. When I walked out I was emotionally exhausted and intellectually exhilarated. At this year’s festival he accomplished that feat all over again with Agony, and if the theatre g-ds are listening we will see that on a local stage soon.

Johnny Boskak is a deeply satisfying piece that evokes the poetic sensibility of Charles Bukowski and the gritty realism of Hunter S Thompson but never loses sight of its innate South Africanness. One of the most human of activities is the overwhelming imperative to tell our stories and the compulsion to listen to them and Morris does this effortlessly. Whether Johnny finds love or his soul is redeemed remains to be seen. What is certain is that yours will be stirred by this passionately performed prose. Morris has toured this Gold Standard Bank Ovation Award winning production nationwide and internationally. Don’t miss this opportunity before Johnny hits the road and heads back north. Raise your thumb and catch a ride. You won’t regret it.