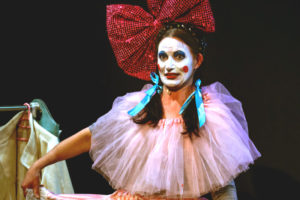 The Sisters Ugly is the sequel to Diane Simpson’s delicious and critically acclaimed Rose Red which told the story of Cinderella from the point of view of her wicked step mother. Rose Red is pretty hard to top, but Diane has done it in spades.

The Sisters Ugly gives us the backstory and history of the ‘ugly’ sisters and explains why they did what they did, through story and even popular songs.

The story itself is intriguing and witty and hilarious, and full of twists and turns, and wonderful surprises that come back and are re-explained and justified (my favourite being the ‘glass slippers’). Deft direction by Onida Cowan, the clever use of a few simple props and lighting, and the reinterpretation of hauntingly familiar songs, like Elton John’s Yellow Brick Road, make this hour-long show sparkle and sizzle, but the real delight is in Dianne Simpson.

From the minute you clap eyes on her as she comes onto stage, she is magnetic, beguiling, hilarious, powerful, wicked and amazing. Her face (and make-up) stretches and contorts; one minute she is a little girl playing silly buggers with her sister, next she is a has-been old pantomime hag, and then suddenly in a moment of sheer vulnerability she is a young woman whose life is shatteringly close to being a constant and enormous disappointment. 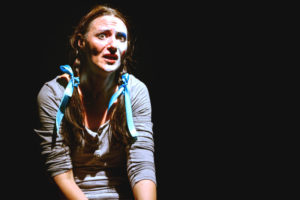 The writing is clever and agile, Diane’s Ugly Sister North Country accent is hilarious, and the detailed picture of the world she creates tears down the bullshit fantasy of traditional fairy tales. Here, the ugly sisters have a voice, and a life, and clearly deserve their slightly more fleshed out moment to be heard.

There are only two more shows of The Sisters Ugly, on Friday 5 and Saturday 6 Jan at 9pm, but there are rumours of it coming back in March, for those that miss it now.

What: The Sisters Ugly

Where and when: Alexander Bar and Theatre, 5 and 6 January