Table Manners is the first of Alan Ayckbourn’s play trilogy falling under the title The Norman Conquests.  All three concern six people – the only number Ayckbourn could accommodate on his Scarborough Theatre-in-the-Round stage which, similar to the Masque Theatre, had limited stage space. Happily, the Masque has enough to comfortably house an oval table, several chairs, sideboard, doors to the house’s interior and patio windows leading onto a pretty English garden. Walls, decorated with simple floral pictures and mirror, are painted in soft green creating (unlike family relationships) calm and peace. 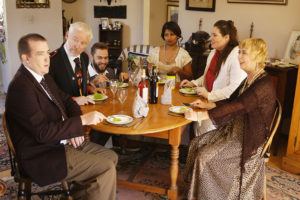 Briefly, the story concerns unmarried Annie (Eve Carr) who has organised a weekend to East Grinstead with, lady-fancier, Norman (Philippe Pringiers). Nothing unusual about that. Except Norman is husband to her competent sister Ruth (Nadine Bentley). Normally Annie cares for her (unseen) invalid mother, so she’s asked her brash brother Reg (Thomas Bowman) and his wife Sarah (Tamika Sewnarain) to stay while she and Norman slip off.

Sarah, quite the bossy busybody, soon guesses Annie’s secret. Except she thinks Annie’s lover is self-conscious veterinarian Tom (Sebastian Lanser) and rather likes the idea. However, when Sarah guesses the truth, she rather prudishly tosses a spanner in the couple’s plans.

This results in the six spending a – querulous – weekend together. Most action takes place around the table, with both Annie and Sarah spending time laying or clearing it, serving and eating (tasteless) meals. Although Sarah tries to control the family’s table manners, these are sadly lacking. As is polite conversation. Everyone bickers continually.

Ayckbourn – whose own troubled family life influenced his writing approach to English middle-class marital conflicts – wrote Table Manners as a comedy – bordering on a farce. Unfortunately, at the final dress rehearsal, the cast didn’t manage to act out or extract the humour both Ayckbourn and director Sue Wilke’s were aiming for. This left the audience dismayed by a rather dull and somewhat laboured performance.

Fortunately this was a rehearsal. And is accepted as that. So it is anticipated the cast will “pull out the stops” to make Table Manners future performances, as humorous as Ayckbourn and Wilke intended.

What: Table Manners
Where: The Masque Theatre, Muizenberg, Cape Town
When: Until 10 June, 2017
Who: The Muizenberg Dramatic Society
Book: bookings@masquetheatre.co.za or 021 788 1898
WS