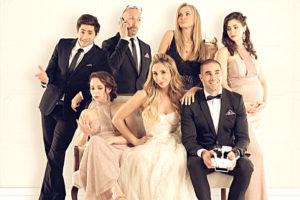 OH. MY. GOD!!!!! As if she wasn’t clever, funny and talented enough to break the internet with her SuzelleDIY series, she’s now gone and got a full-on Showmax spot. Julia Anastasopoulos – aka Suzelle – had us all in fits when she launched her own web series in 2014 on how to do stuff. From braai pies to leopard print bread, she started out as a curiosity and quickly attained cult status. Retailers grabbed her, TV shows snagged her, the public loved her. And still do. Suzelle is quirky but also recognisable, a made-up character based on a person we all know. She’s larger-than-life but still approachable. Adorable, even.

And it’s some of these elements that Anastasopoulos and her husband Ari Kruger (who is the other half of the SuzelleDIY brainwave) have employed in their eight-part Showmax series Tali’s Wedding Diary. The Tali of the title is close to a stereotype, a super-Kugel with a social media fixation. But, just as with Suzelle, there’s enough humour to not make the role offensive. And it’s filmed with the same attention to design detail – colours, accessories, environments – that made SuzelleDIY such an eye-catching vlog. We might not love Tali like we do Suzelle – but we certainly know her.

The story is apparently based on elements of Julia and Ari’s own wedding plans, and has much that viewers will identify with in terms of all the crap that can go wrong. Including family strife, bad bachelorette parties and last minute nerves. Just, in Tali’s Wedding Diary it’s ramped up to the max …

The series takes the form of a mockumentary, in the style of Modern Family and The Office, where the action is supposedly “live”, with a camera crew following the characters and the actors sometimes turning to the camera and addressing viewers directly. They’re fictional scenes, but presented like a documentary. It starts with a proposal by Tali’s boyfriend Darren (Anton Taylor) and proceeds with much drama to the Big Event, which happens after eight episodes of wedding planning.

In between is where all the fun happens, mainly because of the large cast that includes fantastic cameos and a lot of familiar faces. Glen Biderman-Pam is just perfect as Darren’s loyal sidekick, Kate Normington does a fabby Mum Kugel, and Guy de Lancey is suitably prick-ish as a future father-in-law. Then there’re pop-up parts like Mark Elderkin’s snooty wedding venue manager, and Marianne, Suzelle’s BFF who is re-incarnated as a funky hairstylist. And Megan Furniss, taking on a slightly-deranged-relative role – hysterical!

Tali herself is just brilliant, a brittle beyitch with a cellphone glued to her hand. She’s not easy to like at first, but she grows on you, and one can well imagine seeing more of her in the future. She’s a great creation, and the perfect foil to hapless Darren.

Tali’s Wedding Diary offers fabulous holiday watching – it’s easy to binge on these 20-something minute episodes, and at a time of year when family tensions often run high, it’s a great ice-breaker. Loved every minute of it!