RHAPSODY WITH WORBEY AND FARRELL. Steven Worbey and Kevin Farrell. Theatre on the Bay. 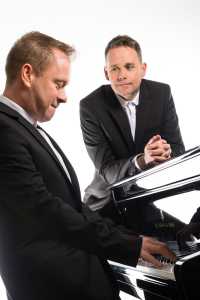 I honestly didn’t know what I was going to make of Rhapsody with Worbey and Farrell at the Theatre on the Bay – but “delighted” ended up being my happy reaction. While the British piano duo brought some serious credentials to this, their first appearance in Cape Town, it wasn’t a given that we would be wowed over. After all, we’ve got some serious ivory ticklers ourselves, just thinking of the Handful of Keys phenomenon, for a start.

But Steven Worbey and Kevin Farrell are in a league of their own. First and foremost, there’s incredible technical prowess happening here. Playing one piano with two set of hands is never going to be easy. Ramping it up by then tackling some of the more challenging pieces from both a classical and a popular repertoire adds to the difficulty. And then pushing the pedal to the metal to achieve warp speed takes things to the next level. In some cases the delivery seemed almost impossible – and were it not for a strategically placed camera which screened Worbey and Farrell’s hands on the keys, one might think some audio-trickery were taking place.

So … very clever chaps when it comes to the arrangement and delivery of a range of popular compositions from diverse composers.

Then there’s their stage presence. Which is just so charmingly warm and unpretentious. The two trade anecdotes about previous performances, and share interesting titbits of information concerning the pieces they play, with a relaxed, friendly delivery. It’s easy to imagine being in their lounge, say, being treated to an informal soirée. 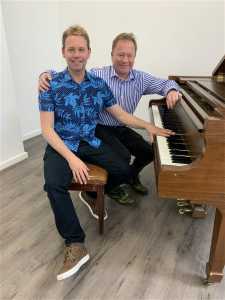 And while they’ve literally toured the globe, playing on board cruisers as well as with leading international orchestras, plus pulling in the crowds at festivals and concert halls, and appearing many, many times on TV and on the radio, they have a really unaffected form of presentation. I found this wonderfully refreshing.

And then there was the programme, which featured a smorgasbord of fave classical and popular “hits” that clearly struck a familiar chord with many in the audience. The performance was bookended by two famous rhaposodies (hence the name of the show, one assumes)- beginning with a fabby version of Queen’s Bohemian Rhapsody and ending with a virtuosic rendition of Gershwin’s Rhapsody in Blue (a marathon requiring both physical and mental stamina).

In between we heard Morricone, Strauss, Joplin, Piazzollo and more – even a cute version of An English Country Garden and the Tequila song- interspersed with easy patter. And we could watch those four hands in focused intensity, thanks to the video feed.

If there was one niggle, it was the tendency for the playing to be on the fortissimo side of things – more piano would have added more contrast.

But in all, an unexpected treat of an evening. Rhapsody with Worbey and Farrell is only on for a short time, so do catch them if this review appeals. It’ll be worth it.

What: Rhapsody with Worbey and Farrell