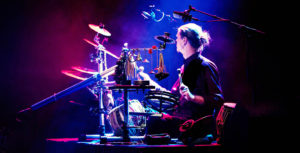 Our Round Corners mini-interviews situate artists outside their given media. MICK RAUBENHEIMER chats with keeper of splendorous time, Ronan Skillen, about art, angles, and Ancient Agents.

I had a very creative upbringing and was fortunate to come through 13 years of Waldorf education in Germany. 50% of everyday schooling was some sort of creative endeavour, so the choices were endless. I generally gravitated towards music and was absorbed and transfixed by musicians from an early age. For 16 years I played classical music as a French horn player and then transitioned from that very rigid academic training into the world of free improvisation, first with didgeridoo and then tabla. This was at a point where I emigrated from Europe to SA and where I realised that I could identify with music as a way of life. I was 21 years old.

I’m fascinated by film and visual art. Especially geometry in nature, there’s a specifically potent balance there. The correlation between nature and music plays a big part in my musical inspiration.

Aged 12, Shakti (with John McLaughlin, Zakir Hussain, Vikku Vinayakram, L. Shankar) had a huge impact on me, and still does, to this day. Their interpretation of fusing east and west with such virtuosity, without ever digressing from their spiritual and musical lineage, is what makes that collaboration so immense.
Trilok Gurtu’s wide palette of fusing percussion in almost any genre across the globe, has inspired me to believe that rhythm is what bridges cultures and connects people the world over. Habib Koité, Tinariwen, Toumani Diabate and Fatoumata Diawara from Mali, have inspired a melodic sense of rhythm for me. Mali’s rich musical culture is one of the most fascinating African regions that I’d love to visit someday.
Nik Bärtsch’s Ronin, as well as Don Li from Switzerland, have inspired me over the last 6 years, with a conceptual approach to rhythm. A zen meditation practice with groove as the centre. Minimal means for maximal effect.

Coming back to the earlier question, there’s an artist I love by the name of Andy Goldsworthy. He uses nature as a medium to portray the concept of art from inception to completion and ultimately to its own destruction.
As a whole, that idea fascinates me, because it illustrates how art is in nothing and everything, and it’s entirely up to everyone’s individual perception and interpretation to engage with whatever is revealed, or not. In many ways music is miraculous, and possibly one of the most mysterious art forms because it can only be perceived through feeling and hearing. The fact that we’ve managed to create ways for music to be experienced on such a broad and incredibly diverse level is as amazing as the medium itself. But on the whole I think that the importance of art is to reveal or provide a vehicle through which life can be experienced from a higher consciousness, and assist in illustrating the mystery we are all part of.

Local South African creatives (in any medium) that currently excite you?

Silence, listening, mountain walks, music practice, because it’s where I learn the most.

Any current project you’re unveiling/wrapping up?
There’s an exciting new project for which we’re currently running a crowdfunding campaign. Ancient Agents – featuring Reza Khota, Schalk Joubert, myself and Fredrik Gille (Sweden).
We will be launching our debut album in Cape Town on 16 September, 2017.
Check out the campaign and all the great perks:  igg.me/at/agents