“Do not go gentle into that good night” – the words of Dylan Thomas have a resonance for  renowned South African actor David Butler (pictured below), who received a cancer diagnosis last year. 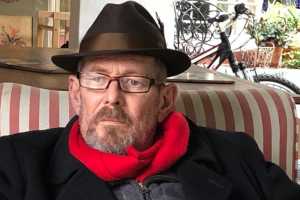 It’s not just poetry that is sustaining David, but a remarkable new treatment called immunotherapy, which his oncologist believes is the most effective treatment for David’s specific type of lung cancer (which has spread to his brain). There is every hope that David will respond positively to this, however, the treatment is extraordinarily expensive. One half-an-hour immunotherapy treatment costs R85 0000 and he still needs 15 sessions. The total amount is a staggering R1 530 000 – and this doesn’t include the doctor’s appointments, follow-up scans and x-rays etc, that are needed throughout the treatment.

David’s daughters and the mother of his children started a Back-A-Buddy Campaign called Saving David Butler. The response from family, friends, the theatre and film fraternity, fans and caring strangers has been extraordinary. To date they have raised half the amount needed. However, the ongoing battle with medical aid, which is both exhausting and time consuming, means that the family’s hope of saving David’s life still rests largely with the fundraiser.

From the big and small screen, to the stage, David has delighted audiences for decades. He has created his own work, with his legendary one-man shows about Herman Charles Bosman, A Touch of Madness and Teacher in the Bushveld. When Covid hit, and the performing industry came to a halt, David took out his hammer and nails and made wooden herb boxes, in order to generate an income. But as he embarks on his biggest role ever, he needs a supporting cast…

The breakdown to date is as follows:

All contributions are welcome.