Look at the grin on the face of Shannon Thebus and you’ll see his delight in christening his new horn at the recording the Cape Town Philharmonic Orchestra made to replace the live schools’ concerts they usually do through the year, says PETA STEWART. 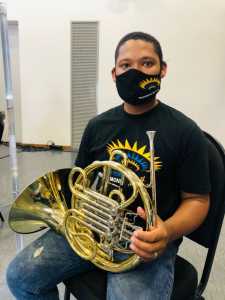 Shannon Thebus, 24, is principal horn of the Cape Town Philharmonic Youth Orchestra but he is also playing ad hoc first horn with the CPO after the principal, Caroline Prozesky, left to settle with her family in the UK.  With income of great concern to the CPO staying afloat under Covid conditions, vacancies are being filled by ad hoc players, and Shannon, who has played many times with the CPO, will of course be auditioning when the position is advertised.

In the meantime, he has a big date coming up in February – performing the Strauss Horn Concerto with the CPO under the direction of Jeremy Silver. This is one of three concerts the CPO is recording now with three CPO soloists for streaming later;  more will hopefully take place in March with Bernhard Gueller again on the podium.

Shannon’s new horn is an Engelbert Schmid. It was being sold by a colleague and while it would have got a good price on the overseas market it was agreed that if the CPO could raise the funds to purchase the horn for Shannon’s use the price would be reasonable. At less than half the replacement value, it was!  Two board members stepped in and so the deal was done. Shannon has the use of the horn for as long as he works within the CPO family of orchestras.

“I am so grateful for this,” he says, “also excited, very relieved and very motivated. It was time for an upgrade to a horn that suited the sound of the CPO’s horn section and I know it was the right choice when members of the orchestra immediately complimented me on tone, projection and blending in. It’s an emotional fit. It’s not me – it’s the right horn for me!”

There has never been doubt that Shannon is a wonderful player. Caroline, who taught Shannon when he was a student at UCT, says that “the sky is the limit for Shannon” and that he is a hard worker whose playing ability was restricted by an inferior instrument.

Shannon came to music by chance 15 years ago.

“I was a pupil, aged 9, at Muizenberg Primary and struggling with my schoolwork.  The principal suggested that I learn to play the recorder and within three months I had mastered it.  The music teacher suggested I switch to an orchestral instrument and since he only taught the trumpet the choice of instrument was made! Soon, and because my teacher said he couldn’t keep up with my progress, my mother enrolled me at the Beau Soleil Music Centre.”

Life moved very quickly for the young Shannon. In Grade 7 at the age of 13, his teacher, Sean Kierman, decided the French Horn would suit him better than the trumpet. Within six months he passed Trinity Grade 6 with distinction and was invited to attend the SA National Youth Orchestra’s summer course in Cape Town. This was in 2010 and he was on that course every year until 2016. In 2010, he was awarded a Full Music Scholarship to the Diocesan College (Bishops) in Cape Town.  It was in 2015 that he first performed with the CPYO and also the Cape Town Philharmonic Youth Wind Ensemble, doing double duty over Saturday rehearsals and performing in concerts with both ensembles.  He also performed at the Stellenbosch International Chamber Music Festival for five years. He played his first concert with the CPO as an ad hoc in 2016 and remembers it well. “I felt nervous and excited,” he says. “My journey with the CPO had begun.”

Winning the 10th SA National Horn Symposium competition in 2018 was a surprise to him. “I was thrilled,” he says. “My mother had entered me.” That’s not surprising for Shannon’s family has grounded him. He was brought up in the New Apostolic Church where he and his sister Megan, a double bass player who tragically and unexpectedly died in mid-2018 , soon became two of the stars. “We did well,” he says “because we were able to join the CPYO. All children in the New Apostolic Church sing in the choirs and learn recorder before moving to orchestral instruments, so my siblings and my cousins were part of this.”

He has  also been a soloist at the Fynarts Festival in Hermanus and he went on tour to Europe with Miagi in 2018.

Shannon is also an organist and performed as a soloist with the CPYO – a benefit concert for the Greyton Donkey Sanctuary. He won the SAKOV Organ Bursary in 2017. Shannon began playing the organ in church when he was 12, accompanying the children’s choir, and went on to study with Mark Mitchell at Bishops before going to UCT, where it was his second instrument.  He is the organist of the New Apostolic Church in Lotus River, the main organist at the Holy Trinity Anglican Church and regularly plays for weddings and funerals, too.

What’s more he is already a sought-after teacher. He has taught horn, trumpet, tuba, euphonium and trombone at the Music Week in Swakopmund each December for three years;  he taught French horn at Pinelands High School, he was ad hoc brass teacher at the Durbanville High and Primary Schools, teaching all brass instruments, theory and conducting the Junior Band. He has also worked as a repairer of brass instruments.

“He will never give up”

Sean Kierman, Shannon’s  teacher for four years and later his conductor in the CPY Wind Ensemble, says he is a good general musician as well as a fine horn player and organist, a fluent reader, and is an understanding musician ready to take advice.

Brandon Phillips, the CPO’s resident conductor, notes:  “I remember when Shannon first started to play with us in the CPYO.  He is very talented and very impressive.  I also love his personality and I am very proud of him – he will never give up. To step into the first horn position in the CPO shows now only talent but guts!”

Shannon’s last word: “Thank you to the CPO for an amazing opportunity, which has been both my and Megan’s dream.”

PS While the CPO’s concert schedules remain very much in the hands of the government and the venues like the City Hall (undergoing renovation) and Artscape (limiting the number of people allowed on stage to just 15), the CPO has implemented even stricter protocols by having Perspex screens made, to make conditions safer for its musicians and conductors. Deputy concertmaster Philip Martens, assisted by Shannon and by percussionist Eugene Trofimcyzk and trombonist David Langford, designed and made 21 screens which shield the winds and brass players from each other and the rest of the orchestra.