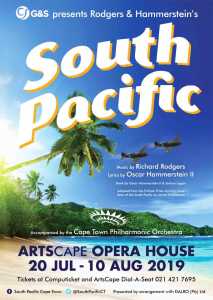 Mention Richard Rodgers and Oscar Hammerstein’s (R&H) names and someone will immediately start singing I Cain’t Say No, Some Enchanted Evening, Shall We Dance? or Edelweiss – just four memorable songs from the 100’s these two geniuses wrote for their 11 Broadway musical theatre hits.

Hits that have stood the passage of time from their 1943 triumphant Oklahoma to (questionably) their greatest collaboration The Sound of Music in 1959.

Who hasn’t seen, or wanted to see Oklahoma, South Pacific, Carousel, The Sound of Music and The King and I? These are R&H’s Broadway musicals that have remained as much part of theatre’s contemporary scene as they were back in those groundbreaking 1940’s and 1950’s.

Over a fair period Cape Town’s G&S has, with remarkable success, mounted most, if not all, the R&H’s musicals. It is however, several years since South Pacific graced Artscape Opera stage – with full orchestral accompaniment.

So why now is G&S staging South Pacific for 22 performances from 20 July to 10 August 2019? To this director Kyla Thorburn responded somewhat seriously before breaking into her famous smile, “It’s a classic and a great one.”

“2019 is South Pacific’s 70th anniversary. The music and songs are marvellous. The story, based on two short James A Michener’s 1948 Pulitzer Prize winning stories from Tales of the South Pacific carries emotional depth, deals with some of the same issues we still face today.”

South Pacific is set in two fictitious islands somewhere between Tonga and Fiji. The time is shortly after Pearl Harbour when American forces have been assigned to the Pacific to protect islanders against Japanese invasion. It’s a romantic drama for which writer Hammerstein, together with Joshua Logan, won the 1950 Pulitzer Prize for Drama.

Emile, an older French expat has a past history which Nellie finds difficult to reconcile herself to. Then, there is Lt Joseph Cable (Richard White/Simon Thompson) who finds himself in a passionate relationship with Liat (Kaylene Hendricks/Laura-Jo Diedericks) a local Polynesian girl. Both Nellie and Joseph have to work through long held racial prejudices to save their relationships.

As this is a classic based on fact, I asked costume and set designer Michael Mitchell had he made any changes to traditional costumes and sets.

“Yes and no. Yes we have slightly upgraded some designs by using Kirsti Cumming AV visuals and surround sound. But, as you said, South Pacific is historical so we have had to source authentic naval and nurses uniforms… right down to Captain and Commander’s medal ribbons and Americans distinctive helmets. Easy to access from toy shops were imitation plastic ones. However, we knew that not even Faheem Bardien, our lighting expert, could make plastic shine like metal so we had to search to find originals. Our two casts total  77 of which 58 are in each performance, making, finding and altering costumes to fit so many has kept our wardrobe people – led by Jennifer Williams –  pretty busy.”

Chipping in Thorburn said “South Pacific depends on a strong male contingent. Initially I worried if at auditions sufficient men would attend. I couldn’t believe that not only did more men than needed present themselves, the 27 selected were willing to suffer naval haircuts, grow a moustache (where required) and prepared to get fit enough to look like a fighting force.”

A trained dancer Thorburn is also an expert choreographer, and well versed in the periods dance styles. “It’s sometimes been hard to toss out today’s accepted  mannerisms. However, Shayni Pappin my ‘drill master’ has drilled everyone to look as accurate as possible”

The 38 piece Philharmonic Orchestra is under Alastair Cockburn’s expert direction. He, along with Thorburn, trimmed the score down to an accessible length for today’s audiences. Said Cockburn, “Robert Russell Bennet’s orchestration is superb.  He has captured wonderful mood and atmosphere. Sometimes deeply tender. Sometimes sad and poignant before breaking into ecstatic exuberant moments for the troops. In fact South Pacific’s music and songs such as I’m Gonna Wash That Man Right Outa My Hair and Cockeyed Optimist provide entertainment on the highest level for every age group.”

Finally Thorburn urges viewers “to expect surprises, and be seated promptly after interval for the biggest surprise of all.”