Cape Town’s choral scene will be in for a treat when three choirs team up to present Karl Jenkins’ emotive Stabat Mater at St George’s Cathedral on Friday 12 October, 2018, at 8pm. Linda Claassen will be holding the baton as VOX Cape Town joins voices with Stadskoor Tygerberg, the Robertson Valley’s Cantique Chamber Choir and soloist Minette du Toit-Pearce to perform this 65-minute work in a visually and aurally-innovative way.

Welsh composer Jenkins, who gained international fame for his choral works Adiemus and The Armed Man, premiered Stabat Mater in Liverpool Cathedral in May 2008 to what was described as ‘mass appeal’

Stabat Mater, taking its title from the Latin Catholic Mass, begins with the words: “Stabat Mater dolorosa iuxla Crucem lacrimosa dum pendebat Filius.” Translated, these mean: “The grieving Mother stood weeping beside the Cross where her Son was hanging.” 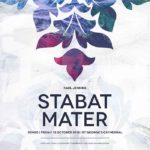 Those few words resonate with Mary’s agony (and, by extension, mothers everywhere) looking up at Jesus – her crucified son. They are words that composers of the ilk of Vivaldi, Dominico Scarlatti, Alessandro Scarlatti, Pergolesi, Haydn, Rossini, Dvorak and Faure drew upon for their impressive Stabat Mater compositions.

Says John Woodland, “Whenever a composer writes a setting of the Stabat Mater, they do so in their own inimitable style. Jenkins was no different. His Stabat Mater presents an evocative mix between Middle Eastern and Western musical styles and is very filmic – and hence accessible and appealing in its character. He intersperses Latin sequences with other texts including Arabic writings, an incantation lament written by his wife, and a 13th-century poem by Persian mystic Rūmī, sung in English and Aramaic.

“Supported by a 20-piece orchestra and Mario Nell on the organ, our three combined choirs, making up over a 100 voices, are working together to accurately intone the Latin, Greek, Hebrew and English languages. Like an exotic flower, Jenkins gives us a blank canvas and the licence to paint his verses with atmospheric lighting and so immerse our audience in a choral and orchestral journey to solace. 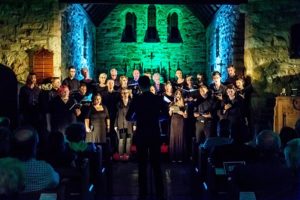 A sonic and visual masterpiece

“Kyle Paulssen is expert at designing lighting that enhances our venues, as anyone who came to our Northern Lights Baltic Voyage at St Andrew’s Presbyterian Church last year will attest. The architecture of St George’s Cathedral has such deep spirituality that Kyle is drawing far into his creativity to merge the cathedral’s timeless aura with Jenkins’s simple, beautiful polyphonic sounds to present a sonic and visual masterpiece not yet experienced in Cape Town.”

Do join John Woodland for a pre-performance talk in the cathedral at 7.15pm.