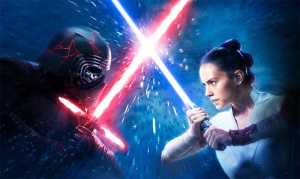 Impossible rescues and great derring-do, hokey plot devices and larger than life characters, adventures in outer space and a touch of spirituality wrapped up in a whole lot of irreverence for organised religion -it must be a Star Wars movie! And yes, there’s a Skywalker in it.

And guess what, it’s still as much fun as ever because nostalgia and exhilarating glee rule the day.

Rey (Ridley), Poe (Isaac) and Finn (Boyega) have to set off on a crazy planet skipping trek through the galaxy to save the day, fighting off the Knights of Ren and assorted star troopers along the way.

It’s not anything they haven’t done before, it’s not anything you don’t have fun watching them do again as the special effects are seamless, the battles are epic and by now you are fully vested in the characters, including even more cute droids.

The plot is very simple because there is adventuring to be done and places, familiar and unknown, to visit, but really, who watches a Star Wars film for plot? You come for the excitement and you stay for the feels.

These are high adventure films featuring a quest for the hero and lots of space battles. Space opera meet swashbuckling pirates with hard-won expertise winning over deliberate ignorance at every turn.

Film number nine, Star Wars The Rise of Skywalker, is director JJ Abrams second foray into the galaxy far, far away. And like he did with The Force Awakens, he riffs off the beats of previous films. After all Star Wars 4 to 6 set the standard for space adventures on the big screen.

In fact, Williams’ music, both previous themes and the original work on display in Rise of Skywalker is a highlight. Not only does he add that necessary touch of thrilling adventure in the right moments, but the music occasionally adds poignant depth to remind you that Georges Lucas’ original impetus for making films was always to elicit an emotional response.

The middle trilogy was much more black and white binary in terms of its morality – that was a fight between the plucky underdogs as the good guys and the fascist galactic empire as the bad guys.

The beginning trilogy was more murky on the morality, as it told the ultimate bad guy Darth Vader’s origin story – could you really blame him for turning to the dark side when the Jedi were quite the hardcore conservative bunch when compared to the more freewheeling, almost libertarian Sith?

And then enter the last trilogy of this decade which really outraged anyone who didn’t like the idea of a strong female character and all those people of character who actually speak. Guess what, we’ve always been there in the Star Wars movies, lurking in the background and these movies have always been about the importance of hope and people from all sorts of backgrounds working together for the common good. It all just happens to be couched in the visual vocabulary of very realistic looking space battles which need a big screen to be appreciated.

Turns out this last trilogy is about not being afraid to be who you are and never underestimating a droid.