The SAMA award-winning Sterling EQ will return to one of their favourite Cape Town venues, Café Roux Noordhoek, on Friday 31 May 2019. 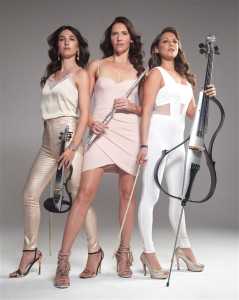 Celebrating a decade in the business, Sterling EQ is known for changing the face of instrumental music in South Africa and beyond with their extraordinary fusion of virtuosity and fresh beats.  The trio boasts four successful releases, over 1000 live performances since 2007, and thousands of followers worldwide. They have performed in 14 countries and for live audiences of up to 40 000, and on live broadcasts to millions of global television viewers.

Sterling EQ has recently released a music video epic of their rendition of the Dan Heymann song Weeping. The video, shot in Cape Town and stretching from Khayelitsha to Table Mountain, features the all-woman trio as well as a group of children from Muzukidz, a local organisation that offers violin tuition to children from low income township families.

The video follows the story of one of the children and her mother, journeying from their home to their respective destinations in town. Sterling EQ’s members are omnipresent as their performance of Heymann’s melody flows together with the unfolding story. The video was shot over three days at more than 20 locations.