Stuart Lightbody Artifice is the latest show by the magician, whose work is described as “beautifully impossible while still being impossibly beautiful”. 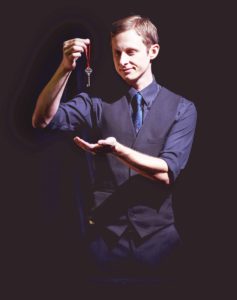 Artifice is a magic show about making connections and rediscovering wonder. In the right hands, there might just be art in artifice. The winner of the Theatre Award at the FringeWorld Festival in Australia (2018) and the Spirit of the Fringe Ovation Award at the National Arts Festival (2019) will share some of his favourite pieces of magic, both old and new.

Lightbody is going to South East Asia in a couple of weeks, but first he needs to raise some funds, because noodles are cheap but they still cost money. He’s inviting audiences to watch some wonders before he wanders, and help him to spread his magic around the world. Even if you’ve watched every show Lightbody has ever put on, he promises there will still be some pieces to catch you by surprise. And if you give him your postal address after the show, you might get a postcard from an exotic jungle location. This is your chance to see an internationally awarded demonstration of theatrical sleight of hand.

Stuart Lightbody is a South African National Champion of Magic who lives mostly in Cape Town and performs all around the world. He has spent over 20 studying and practicing the art of magic. As a South African Magic Champion, Stuart has represented his country at the World Magic Championships in Sweden and at the World Magic Seminar in Las Vegas. He has also won numerous local and international awards at arts festivals and magic gatherings.