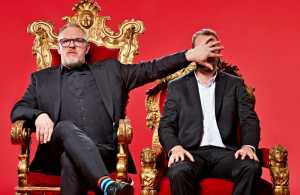 Hosted by Greg Davies (can’t say I knew anything about him until now) and his deadpan and utterly delightful sidekick and task operator Alex Horne, five British celebrities spend 10 episodes in “competition” with each other, doing the most utterly ridiculous tasks – hiding three aubergines, working out codes, building towers, doing stuff with dummies, team challenges that make absolutely no sense – all to win points to be crowned winner at the end.

It was the aubergines that hooked me. I started laughing. Then I started howling. The dogs came to see what was wrong. I don’t ever slap my thighs, but I was slapping my thighs. I stopped breathing. I started again to laugh some more. The next day I had a stiff diaphragm.

Last night I was undone by a rice moving scene. You have to see it to understand the absurd hilarity of it. Celebrities like The Sinnerman (from The Chase) moving rice to a container without touching the rice had me lying on the floor in laughter agony. There was also the moustache scene. Beyond. Hilarious beyond.

Maybe not for everyone …

Taskmaster is not going to be for everybody. If you take your competitions seriously and you care about things like scores and fairness and logic, you will hate this show. If you put your British celebrities on a pedestal of seriousness you will not love this show. Otherwise, it is the best and craziest laughter without a story that you can have. I love it.

Look out for my favourite competitors Jo Brand, Daisy May Cooper, Katherine Parkinson (she killed me), Mike Wozniak, and Mawaan Rizwan, although everyone is brilliant. Alex Horne is also ridiculously funny.

(I believe the Americans took the concept and destroyed it without any irony, so I would just make sure to watch the British one, yeah?)