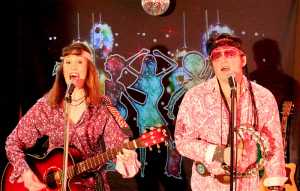 The ‘70s Vs ‘80s Tribute is a brand new live show from James Marais and Monique Cassells, which will be presented at The Drama Factory in Somerset West on 27 September 2020.

The duo are know for their previous shows Oldies But Goldies and From Memphis To Las Vegas:  Elvis Presley Tribute, both of which were presented at The Drama Factory to sold-out audiences towards the end of 2019.

Just as with their previous shows, The ‘70s Vs ‘80s Tribute is a mini-theatrical experience which celebrates a selection of the great artists and songs from these two dynamic and musically diverse decades.

James is renowned as the Number One Elvis Presley tribute artist in South Africa, and has appeared on television many times, including appearances on the SABC 2 game shows, Noot Vir Noot and Musiek Roulette, as well as Kyknet’s Jou Show, presented by Emo Adams. He displays his versatility with songs by legendary artists such as Cliff Richard (“Devil Woman”), Chris de Burgh (“Lady In Red”), Neil Diamond (“I Am I Said”), Bruce Springsteen (“Dancing In The Dark”) and Tom Jones (“Kiss”).

Monique has gained widespread praise for her powerhouse vocal performances, and continues to showcase her versatility with tributes to greats including the Carpenters (“We’ve Only Just Begun”), ABBA (“Mamma Mia”), Bryan Adams (“Summer of ’69), Queen (“We Are The Champions”) and Tina Turner (“The Best”).  Monique made her television debut on the SABC 2 show Musiek Roulette in May 2018.

James and Monique will perform some memorable duets in the show, putting their own spin on songs by artists such as the Doobie Brothers (“Long Train Running”), Smokie (“Needles And Pins”), Creedence Clearwater Revival (“Who’ll Stop The Rain?”), Billy Joel (“You May Be Right”) and Elton John (“Crocodile Rock”).

Where and when: The Drama Factory, Somerset West on 27 September 2020