It is common practice for older people to complain about the youth. Yet, older folk often fail to listen to compromises offered between sparring groups that could have prevented either side from picking up arms to settle disagreements.

Gaining personal wealth or political power is usually behind conflict. And what better way to obtain that than to provoke opposing sides to shoot their way to a settlement?

However, the truth is, anyone who has personally been part of war would rather negotiate for peace than battle grievances out with guns and bullets.

So, spreading the word that peace is possible and that “sorrow, pain and death” can be overcome are between 350 to 400 pupils from Rustenburg Girls High School for Girls (RGHS), Rondebosch Boys School (RBHS) and South African College High School (SACS) who will give two performances of The Armed Man – A Mass for Peace by Karl Jenkins. 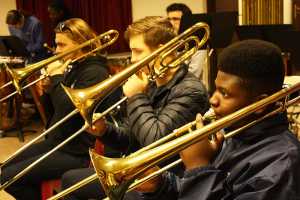 All three schools are famous for their music departments and choirs, and in conversation with Jaco Goosen, Rustenburg’s Musical Director and organiser, I learnt that the combined choral collaboration between RGHS and RBHS dates back to 1968. That was when Dr Patrick Wise, Director of Music at RBHS and Ruth Dose, Choir Director at RGHS, produced their first choral collaboration with Handel’s Messiah.

Then with Vetta Wise’s appointment as RBHS’s Choir Director the two schools were joined by Diocesan College for another performance of Messiah and the tradition continued under RGHS’s Elizabeth Sole’s leadership until 1998 when SACS joined the collaboration.

Since then the choirs have successfully performed, among other works, Karl Orff’s offbeat Carmina Burana, John Rutter’s Requiem and Fanshawe’s African Sanctus.

“What makes this Armed Man presentation unique, is our pupils reaction. I think this generation are so heartily sick of all the killings that happen, not only on their own doorstep, but worldwide, that whether they have been members of our choir or not they are asking to participate,” he said.

“True this is Rustenburg’s 125th anniversary… a real milestone in South African Schools history. But it is more than that. Jenkins’ peace message is also about inclusivity, caring, sharing and accepting each person for what they are. Something today’s youngsters feel strongly about.”

Such a big choir surely requires orchestral backing so what musicians are involved? “Each school retains a large orchestra. But it has been impossible to use everyone, so each school has selected their top players who have been practising hard to attain the high standard demanded by our conductor Alexander Fokkens. Where no scholar is available to play a particular instrument such as the bassoon, we have obtained the services of a professional musician.

“Our soloists are mostly drawn from professional ranks. Brittany Smith is our soprano, Vasti Knoesen is mezzo, Makuvo Senagana sings the tenor part and Barend van der Westhuizen is our baritone. From the Open Mosque we have Abdul Rashid Hamisi performing the Muezzin and following in his family’s footsteps Nicholas Poulter is our treble – his cousin Matthew sang treble in our 2011 presentation and sister Erin, sings in our choir.”

Sung in Latin, English and French against visuals on how war and peace impacts on nations, this Armed Man presentation at the City Hall by some of our country’s future leaders is a must for every peace loving citizen.