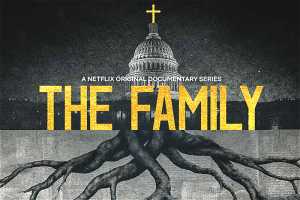 I went down the Netflix documentary series hole yesterday, and only surfaced after I had binge watched 5 x 1 hour long episodes of The Family. I can’t remember who on Facebook recommended it, but I wasn’t prepared for the electric horror of the deepest, darkest and most dangerous tentacles of Christianity in American politics, from Ike Eisenhower right up until now.

What started out as a badly acted out docu-drama focusing on the experiences of Jeff Sharlet, author of two books on The Family, becomes a riveting and nauseating series about the pervasiveness and power of this ‘secret’ and intentionally invisible group of Christian fanatics, who were mostly led, for decades, by Doug Coe, a ‘friend’ to those in power.

He gently and loosely pulled people (white men) towards him and his missionary style of Christianity.  Once the group had embedded themselves amongst presidents and governors and senators at home, they spread over the world, reaching into Romania, Russia, Africa and elsewhere, to do the things they couldn’t complete at home. It is seriously dark stuff, in the name of Jesus. The message? Christianity is not for the poor. It hates the poor. It seeks out the most wealthy and powerful and aligns with them to spread its work. It is the maker, user and abuser of the Trump puppet presidency, and those like him – ultra conservative, deeply right wing, fascist leaning little white men who rule the world.

Each episode focuses on different aspects of the horror story. The first portrays the induction of young men into the organisation, where they serve the politicians of DC from frat house-style group accommodation. There is an episode that deals with how they manage those that stray – mostly by having affairs – and how American power politics are run by the Christians in the wings; both at home and abroad.

But for me the most sinister part of the story was its normalcy. The yearly, and massive, Christian prayer breakfast for the sitting president of USA, organised by The Family has to be the most creepy, terrifying and worrying part of the story – where Christianity is an exclusive boys’ club specialising in money and power. These breakfasts alone explain the normalisation of Christianity as American. From here it is a hop, skip and a jump to Islam being the other, the enemy, the devil. 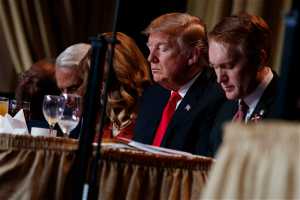 America is run by Christians – some more fanatical, fundamental and extreme than others, and it is clear they have the country, and the world, in a vice grip of power politics. There is nothing about loving the poor here. There is nothing revolutionary or anti-system here. These are the Pharisees at the gates, these are the evangelists in huge cars and mansions, these are those that sanction and indeed place their puppet Donald Trump in perfect position for them to do their fundamental work. If I believed in a force of evil, I would believe it has found a home in them.

The Family is five terrifying hours of who is in charge in America and beyond. The devil is a rich, white power broker, with a book called Jesus in his hands.