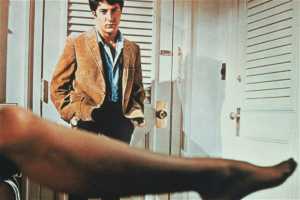 Above the surety that night follows day, another thing beyond question is – step into any theatre and you’ll find a surprise.  What that will be is of course the surprise. Yet not for one minute did I imagine being bowled by The Masque Theatre’s minuscule backstage space.

During years comfortably sitting in the auditorium, watching dozens of shows, I’ve heard grumbles about how difficult it is to move large casts, props, flats, and furniture about.  I’ve even added my own moans about backstage crews needing to speed up scene changes. Now I understand – there is simply too little backstage space.

Let me explain the layout. There are three levels.  A dressing room basement.  On the ground floor are the stage, wings, male and female dressing rooms, toilets, scenery storage and a workshop. Up rickety stairs bits and bobs are kept.  What is surprising that, despite working under these limited conditions, hammer, saw and paint crews have, regularly, created superb sets.

Clocking up another “wonder” is Barrie Howard’s futuristic set design for The Graduate’s forthcoming season, 14 to 30 November 2019. Although not completed when I attended a rehearsal, the set’s “floating” beams are an impressive engineering feat for non-professional carpenters. They are constructed in a way to create a feeling of timelessness, in a play where sexual ploys are timeless.

A first for The Masque Theatre

Briefly the story concerns (almost) 21-year-old Benjamin Braddock, a recent graduate with no particular career goals. This weakness makes him easy prey for the older, glamorous, sex-starved, bored Mrs Robinson’s tried and tested seduction techniques. Their steamy sex scenes are not without rows, but Mrs R and Benjamin get along just fine in bed … until he meets and falls in love with Elaine Mrs Robinson’s daughter.

With almost two weeks until opening night and without benefit of lighting or make up, the word-perfect, cast speaking in soft, understandable American accents, turned in defined characterisations.

Sellier and Summers make ideal sparring lovers.  Summers, a natural beauty, bends easily into sultry seductress. By coincidence Sellier is in his early 20’s; a recent Organisational Psychologist graduate, he taps into his studies to intellectually internalise how Benjamin ticks. In his first major role, Sellier is undaunted by the magnitude of this part that sees him on stage for 10 of the eleven scenes.

Summers is a consummate actress. Her years of experience on stage and in film come into play as Mrs R where by exploiting her magnificent eyes and body language she seduces young Benjamin.  She is however, a tigress when it comes to condoning Elaine’s relationship with Benjamin.

Thomson has grown up within the art and theatre world, and at 16 is well able to play 18-year-old Elaine, a typically unsure teenager.  She, Benjamin and Summers make perfect foils for each other.

Sex may dominate in The Graduate. But the script goes deeper than seduction and casual sex. It defines that the root cause of dysfunctional families stems from shouting at each other, rather than listening.

MBMS WhatsApp fest on your phone