Contagious Theatre will present their interpretation of the Ernest Hemingway classic The Old Man and the Sea at the Fugard. 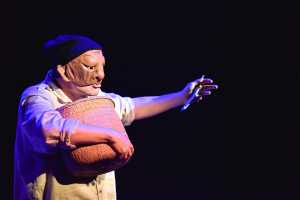 Santiago is an old fisherman who hasn’t brought in a catch for 84 days. While the villagers pass judgments on his past and his future, the old man heads far out into the Gulf of Mexico where he hooks a giant marlin. And so begins his epic battle.

Working within and around the themes of life, death, brotherhood and the struggle for existence, this imaginative adaptation gives this classic text a modern twist for the contemporary audience. Using chorus, mask, physical performance, an innovative set and epic sound design, this is a delightfully theatrical re-imagining of Hemmingway’s classic tale.

The production is adapted by Nick Warren with Jenine Collocott and stars James Cairns, Taryn Bennett and Jaques De Silva. It features an original soundtrack by Sue Grealy and is designed and directed by Jenine Collocott.

Contagious Theatre most recently presented The Snow Goose at the Fugard to critical acclaim. The company consists of critically acclaimed theatre makers, Jenine Collocott, James Cairns and Taryn Bennett with long-time Fringe producers Simon and Helen Cooper. They all have had work shown internationally in Europe, the US, the UK and Australia. Contagious produces independent fringe theatre that brings the creative freedom, simplicity and energy of the festival circuit to mainstream audiences.

What: The Old Man and the Sea