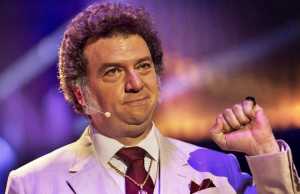 Why did nobody tell me about this hilarious, hideous, and grossly over the top series that kept me in cringey stitches for all nine episodes (of the first season)? The Righteous Gemstones follows a world-famous televangelist family with a long tradition of deviance, greed, and charitable work. It gets more absurd as it goes along, with gross spending, family bickering, cross church in fighting, idiocy and, and it gets funnier and funnier.

The church family is beset by a blackmailer of Carl Hiaasen proportions and things spiral out of control as the blackmailer and the Gemstone siblings get more mad, monstrous and horrible.

Sometimes a person has got to make the series they want to star in. Often these end up as vanity projects but here Danny McBride manages to pull off the most outrageous performance in a most hilarious and squirmy satire of all things evangelical. He plays first born vile son Jesse Gemstone, who spends his time trying to cover up a seedy, drug-fuelled prostitute party, secretly filmed by his out-of-favour son. It’s bad.

Danny McBride has also assembled a cast from “heaven” including the amazing John Goodman who plays head of the family, head up his bum Eli Gemstone, and one of my own personal favourites, Walter Goggins, as Baby Billy Freeman. But everyone is brilliant. The younger members of the Gemstone family are all perfectly cast, as are the villains, wives, and sidekicks.

The comedy is situational, but also brilliantly character driven and the scenes between the bickering siblings are guffaw funny.

The storyline is pure insanity

The Righteous Gemstones is beautifully shot, with wild sets, the full flash of showy church money tack, and the outrageous trappings of convoys of cars, costumes, swimming pools, and grand, garish church sessions. There are three private jets called The Father, The Son and The Holy Spirit. It is so rude. The soundtrack is hillbilly, Christian country pop and I love it.

The storyline is pure insanity; a vehicle for greed, family feuds and hypocrisy, and it kept me on the edge of my seat. I can’t wait for the second season to hit Showmax. I want more of these vile, spoiled, ignorant and disgusting people in this sick and twisted family. What’s wrong with me?

What: The Righteous Gemstones