The Three Blind Mice at Gate69 is the summer season production at this deliciously camp restaurant-cabaret venue in the city. 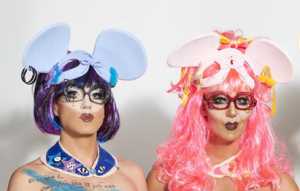 In 2017, you were warned about the perils of believing everything naughty little Willy said about sweet-cheeked Macbeth. In 2018, The Three Little Pigs taught you that no matter the size of your ass (or any of your other jiggly bits, for that matter), you shouldn’t let just any old wolf tap it.

For the third installment in their annual adult pantomime series, The Trolley Dollies are back in faux-fur animal queendom, albeit shortsightedly, and this time they’ve got some fabulous eyewear to show off. Gate69 brings you The Three Blind Mice.

In a year headlined by Donald “The Golden Duck” Trump and his cousin-in-missing-chromosomes, Boris Johnson, the team at Gate69 thought they’d stick with the theme of 2019 and keep things, well, blind!

The Three Blind Mice on steroids …

“Three blind mice, three blind mice, see how they run…” Remember that little ditty? Good! We’re going to stop you right there, though. These mice don’t run; they’re wearing high heels for heaven’s sake! They’re also seven feet tall and foul mouthed, so you can take that sweet little nursery rhyme and throw it out with the baby’s bath water. Except for the bit about the farmer’s wife. Keep that in. 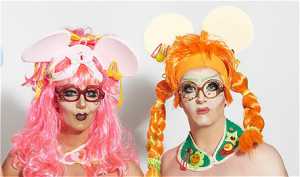 She’s a vicious vixen with an alcoholic axe to grind and it’s most likely going to land on the heads or tails of three not-so-innocent blind mice. She’s hell bent on the demise of these robust rodents, even if it means hiring the help of a hunky, vegan, spandex-wearing-bodybuilder, who also happens to be a cat.  If you’re confused about what you’ve just read, don’t worry – so are the delectable Dollies! All that matters is that audiences are in for an inter-species romp set against the musical backdrop of the 70’s and 80’s and with a dash of Brexit.

What: The Three Blind Mice