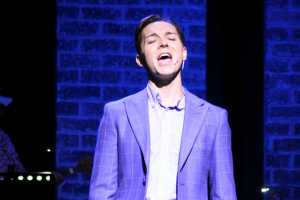 A red carpet, a sanitiser’s cheerful welcome, a thermometer-gun-wielder and a mask-checking-gatekeeper met patrons rolling up to the Masque Theatre on Thursday evening for This Moment’s opening night. Two eyes twinkling above nose and mouth coverings left little doubt regarding guests obediently obeying Covid-19 safety regulations. No one, absolutely no one, intended missing out on this first live musical cabaret for months at their favourite False Bay theatre. Social distancing came naturally as did spacing between the auditorium’s unreserved seats.

‘Somewhere’ upstage-centre-back sat the three piece band. Led by multi-talented musical director Neil Leachman he did a grand job from his synthesiser, combining conducting with fussing about auditioning and directing.  Pianist Tersia Harley, accompanying herself, sang a soulful rendering of gospel-style “I Know Where I’ve Been”, from Marc Shaiman’s musical Hairspray. Ted Faulkner, on bass guitar, completed the band’s trio. Top marks to Leachman who, also acting as sound designer, pitched decibels at comfortable eardrum levels. 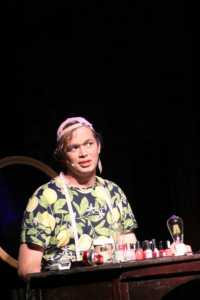 Programme notes say that This Moment’s genesis grew from the team’s yearning to be back on stage. A good enough reason why writers Sheldon Cross and Jana Botha joined authorship skills to rework lyrics lifted from famous musicals. Kicking off with “Broadway Here I Come”, followed by hits such as “Maybe This Time”, “Climbing Uphill”, the journey to stardom via rejection and working odd jobs as cleaners also included “The Show Must Go On” and “From Now On”.

I’m not sure to what extent the theme of This Moment represented the cast’s personal lives. But the team’s performances lent credence to the struggles, disappointment and  rejections too many would-be stars suffer before finally placing one foot onto the ladder for the long climb to success. Conversely it seemed a trifle unfair when, after obtaining fame, all glamorous diva Megan Armstrong-Davies wanted was to swop it for a ‘happier normal’ life – whatever she considered normal to be. 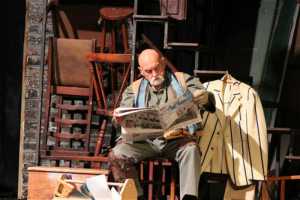 Fortunately her wish came true, as did the wishes of Daniel Anderson, Gizelle Willows, Hannah Moerrdyk  Kaylene Hendricks, Matthew Kingwill and Richard Whitaker after Leachman cast them in his newest production.

Just a comment –  it seemed extremely odd that This Moment ended with a whimper. After joyously rendering “The Show Must Go On” and “From Now On”,  the cast simply turned their backs and walked off.  Without a grande finale such an unexpected conclusion caught everyone unaware that the moment to applaud had arrived.

May I suggest Cross and Jana quickly alter that. Silence is no reward for a well presented and performed show.

Where and when: Masque Theatre, Muizenberg until 20 December