I have been in a funny mood lately and haven’t been able to stick with anything in terms of series, so I watched a couple of movies and thought I’d write about them in one post, says MEGAN CHORITZ: 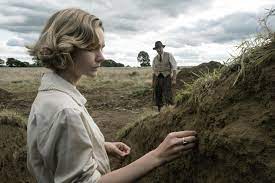 So many of my friends and colleagues whose opinions I value adored this movie and I went in with high hopes. I love a British period drama, and I love excavations. I did not love this film, even though Carey Mulligan gives a fantastic performance.

There is not much to the plot. Rich, ailing widow gets grumpy, single minded excavator to come and dig on her property and his brilliant work is taken over by the pompous official snot bags. There is a very thin subplot involving the insufferable Lily James, who brings Mama Mia to everything she does.

The biggest problem with this movie, however, is Ralph Fiennes. Wow. He manages to do a lot of ACTING for a character of few words. He is busy with his handkerchief, his hands, his face, his bicycle, the soil. Very, very busy. Lots and lots of acting and business and filling up the screen. I wished he had just let the character live, instead of forcing him to be a masterclass in complicated characterisation. I was exhausted by him. In sharp contrast, the cameo role of his wife, underplayed with great subtlety and minimalism by Monica Dolan was a total breath of fresh air. She served the film, the story, the period with great care and sensitivity.

I cannot muster up a reason why anyone should watch this film.

This award-winning movie was made in 1994 and I have never watched it before; I don’t know why. I love Kazuo Ishiguro’s writing, and I have read almost everything of his, but not The Remains of the Day.

I was really blown away by this beautiful, aching, small, unresolved, magically bleak story, and the performances of a lifetime from everybody, up to and including the late Christopher Reeve.

I am sure everyone knows the plot – the complicated and unmanifested relationship between emotionally invisible butler Stevens, and more outspoken housekeeper Miss Kenton, against the backdrop of WW2 and the misguided allegiance of their boss, Lord Darlington, to the Germans. This un-relationship spans decades, and it is utterly heart breaking.

I loved this proper Merchant Ivory production, with its attention to detail, its absurdity, its subtle and unsubtle class differences, its British agony of hidden emotions, and its honest portrayal of the lesser class of servants and what they are ‘entitled to’.

I loved the set, costumes, music, performances, characters and the pace, all working to create heartache and poignancy without it being sentimental. I loved it and am so glad I finally took the time to watch it.

(Spoiler alert): After watching a real oldie, I wanted to watch something totally contemporary. I love Amy Poehler, and this was what was trending on Netflix, so I thought I would start it and see, and then I got sucked in and watched it until the end, with a smile on my face. I did have to shoosh my rising critical voice, and sometimes I had to sit on it quite firmly as it wriggled, wanting to stop me from my enjoyment of this high school movie.

The plot. Shy young teenager gets inspired by the outspoken new girl in her class to take on sexism at her school by starting an anonymous zine called Moxie. Her mom is an outspoken feminist, and the old clothes, photos, music and diaries of her youth provide the ideas and sentiment for her daughter. So, girl teenager finds her voice (with the help of everybody else), gets her boyfriend (subplot), and discovers the value of true friendship (her bestie is much nicer than she is).

While this movie is seriously fun to watch, and the kids are a delicious cross section of colour, gender, sexuality, and American confidence and self-obsession, it is also a bit light on complexity. The toxic, entitled white football jock is pure villain, the enabler school principal is so short sighted and bound by the old system she is a caricature, and the nod to BLM all a little obvious, especially the ‘don’t touch my hair’ monologue.

Another sticky problem with the movie is the fact that it is centred around a young white girl. Her journey is initiated by a person of colour, her bestie is of Asian descent and her love interest is a person of colour and a better feminist than she is, so why did she deserve the primary protagonist role in the film? Why not any of the others?

But, Moxie is still a fun watch, and I did find myself rooting for the right kids, who won in the end (even though the rape disclosure to an entire crowd seemed 100% unlikely and not thought through).