Totally Under Control is a chilling documentary which charts the terrifying progression of the Covid-19 pandemic in the US. 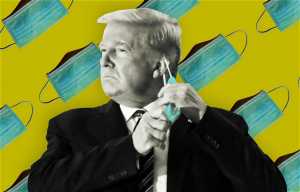 With thousands dead, millions infected, and massive job losses, the Trump administration’s response to the Covid-19 pandemic has been marked by incompetence, corruption and denial, creating a country in crisis. Totally Under Control, directed by Alex Gibney, Suzanne Hillinger and Ophelia Harutyunyan, has been released in October on Apple iTunes in South Africa, Australia and the UK, and on Hulu in the US.

Filmed in secret over a period of five months, with robust testimony from public health officials, White House insiders, scientists and sociologists, Totally Under Control exposes a system-wide collapse caused by a profound dereliction of Presidential leadership.

Over 200 000 people have died of Covid-19 in the US so far, with nearly 9 million infected across the country. At one point, the death rate was running at an average of 1,000 / day – double the number of those who perished on 9/11 every week. Added to this, poorly applied lockdowns have led to massive job losses (23 million by April), widespread hunger and dislocation. While the current administration claims a job well done, the fact is that the US response to Covid-19 is one of the worst. How did the wealthiest and most powerful country in the world manage to fail so thoroughly in its response to a global pandemic?

Academy Award-winning filmmaker Alex Gibney, directing with Ophelia Harutyunyan and Suzanne Hillinger, interrogates this question and its devastating implications in Totally Under Control. Interviews with those at the frontline of facing the epidemic in the US and globally, reveal a clear crime of negligence. By 7 February 2020, Trump knew that Covid-19 was, in his words, “a deadly virus.” But instead of working to protect the American people by containing the virus, the current administration was willfully blind to the growing contagion. “It’s like a miracle; it will disappear,” said Trump, in the hopes that voters wouldn’t notice any problems until after the 2020 election. But as the election date looms, Americans are increasingly enraged by a lack of clear leadership, endemic political corruption, and a marked failure to keep the nation safe.

“One of the inspiring things about the film is the competence and dedication of the scientists and doctors and nurses on the ground, but all their skill and all their talent was upended by an administration that was refusing to empower them,” says Gibney.

It will be some time before the full extent of the damage wrought by this pandemic will be understood, but Totally Under Control will stand as the definitive account of the Trump administration’s incompetence, corruption and denial in the face of this global pandemic.

What: Totally Under Control