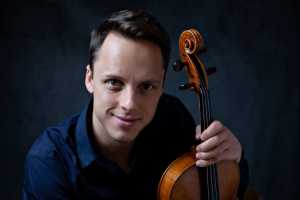 Petrus is being joined by the CPO’s principal flute Gabriele von Dürckheim to perform the Concertino for Viola, Flute and Chamber Orchestra by Stefans Grové in the CPO’s new season of Cyber Symphonies. Booking is open on the Quicket platform now. Jeremy Silver will be on the podium for the concert which was recorded at the Hugo Lambrechts Music Centre.

This work, one the composer describes as “day voices and night flutes in eternal flight”,  was composed in 2005 and dedicated to two of South African’s finest musicians, Helen Vosloo and Jeanne-Louise Moolman, and it had its premiere in 2009.

Contemporary works are often a challenge, and about this work Petrus has this to say: “I feel lucky to have the opportunity to perform this Grové.  There aren’t many compositions for flute and viola, especially not together with orchestra.  And also there aren’t many compositions for viola by South African composers. The composition is unique with dark earthy sounds and very rhythmical dance-like characters in the faster outer movements and a mesmerising, eerie-sounding slow movement in the middle.  It reminds me of the later compositions by Igor Stravinsky, such as The Rite of Spring.  I could very easily imagine the Concertino to be performed as accompaniment for a ballet in a modern, African style. What’s more, I’m very much enjoying working with Gabi.  She is simply an outstanding flautist and I have such admiration for her professionalism and musicality as an orchestral and chamber musician as well as a soloist.  We have been spicing up our rehearsals even more with some extra duets for flute and viola which we might be performing soon in a different context!”

Although a work “for chamber orchestra”, the orchestral forces aren’t specified and in any event under current Covid restrictions there cannot be more than 50 in the venue – and that includes not only conductor and soloists but camera crew too.

In any event, Petrus has a great love for chamber music, especially for string quartet.   Although this work is for a larger orchestra, he enjoys the intimacy. “I have been a member of several established string quartets, one of which I founded in Hanover in Germany. I find the process of rehearsing a piece of music together with a small group of instruments very stimulating – having in depth discussions and consensus on the musical interpretation and being completely in sync with one another,” he says.

Petrus was well-established himself in Europe before deciding in 2018 to return home.

“Coming back was a difficult decision. I had lived in Austria and Germany for just over seven years and I had developed good friendships and professional connections.  However, I had always had a great longing to spend time with my family and in my home country.  When I heard about the vacancy for principal viola at the CPO, as a performing violist who loves being on stage, I couldn’t think of any better job opportunity. It took me a while to adapt, but I am very happy I made this decision,” he says.

He’s a well-balanced young man, active in nature. “I swim and run a lot, and enjoy long hikes in the mountain with friends. I think I need this to balance the hours I spend alone indoors practising and rehearsing.  I also love spending time with my family and socialising with friends.”

Although his parents aren’t musicians, both have a love and appreciation for good music.  “My mom’s side of the family had a strong musical culture, with my grandmother and both my aunts choirmasters, organists and music teachers. As a small child visiting my grandparents, I was fascinated how my gran played the organ, with both feet and one hand, while the other hand is up in the air conducting her church choir and also mouthing the words for the choristers! My mom sang in choirs throughout my childhood in Worcester and Wellington, so I was exposed to a lot of choral music.  We’ve always had music instruments at home – a piano; my dad could strum a few Afrikaans folk tunes on the guitar; and I inherited my great grandmother’s violin.”

Petrus started violin lessons at the age of seven. “ My mom decided to take my sister, two brothers and me for music lessons. We all played an instrument at some point during our childhood.  Somehow I was good at it and I enjoyed it, so I kept going.  I often played at school cultural events.  Then I took up piano lessons and ended up accompanying the school choir for national competitions and being the school accompanist for assembly.  For a great part of my school career I was the only child in school playing the violin.  It became part of my identity.  There were stages when I wanted to quit, but I could never imagine my life without music.”

Concentrating on the viola

Petrus received an MMus in Chamber Music, studying with the CPO’s guest concertmaster, Suzanne Martens, at Stellenbosch University, then studied at the Vorarlberg State Conservatoire in Austria (Master’s Diploma in Viola) and at the Hanover University of Music, Drama, and Media in Germany, where he completed an MMus in Viola.

It was only when he left South Africa in 2011 that he decided to concentrate entirely on the viola. He had gained orchestral experience as a violinist in the SA National Youth Orchestra and as an ad hoc player with the CPO and Camerata Tinta Barocca. But in his last years at Stellenbosch curiosity led him to experiment with the viola and soon after he was hooked!

For now, he is happy and settled, performing chamber music concerts but in time he would like to teach a big class of violists.

Great idea, because good violists are often in short supply!