Get ready for a brand-new production and major world tour of Queen and Ben Elton’s multi award-winning rock musical We Will Rock You. The production will launch in Cape Town and Johannesburg before setting sail on the “Seven Seas of Rhye” touring Asia and Europe in 2020 and 2021. 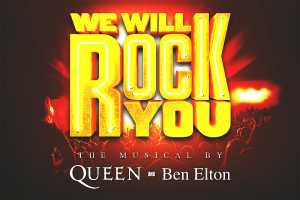 Telling the story of a group of bohemians in a dystopian future and featuring 24 of Queen’s greatest hits, We Will Rock You will be directed and choreographed by Olivier Award nominee Nick Winston (Annie, Loserville, Waiting for Godot).

The production will feature set design by Tom Rogers, costume design by Hayley Grindle, lighting by Tim Mitchell and sound by Ben Harrison. We Will Rock You has a combined South African and international creative team. Full casting and further dates and venues to be announced in due course.

New generation We Will Rock You

The musical is produced by SA promoter, Showtime Management. “Showtime Management is excited to be involved in a new partnership with international producers including Selladoor Worldwide and Gavin Kalin Productions to bring the new generation We Will Rock You hit stage production to this country in 2020 before going on a world tour. We have successfully produced a number of Broadway and West End hits in South Africa featuring SA talent that have gone on to critical acclaim in various overseas territories. Revisiting We Will Rock You as an originating partner with our new international partners on this new look production is a proud milestone for Showtime,” says Hazel Feldman of Showtime.

Showtime Management previously staged We Will Rock You in Johannesburg, Cape Town and Durban in 2005 and 2006 to rave reviews and nightly standing ovations. Following sold out seasons in South Africa, the show then enjoyed a highly successful tour to New Zealand and Korea in 2007. Galileo, Scaramoche and Killer Queen are a few of the leading characters who will take audiences on a journey into the future. South Africa, are you ready to rock?

What: We Will Rock You