Lockdown is nothing new for the vampire housemates of What We Do in the Shadows (WWDITS), who’ve been doing this for a good couple of hundred years longer than the rest of us – plenty of time to get on each other’s nerves. 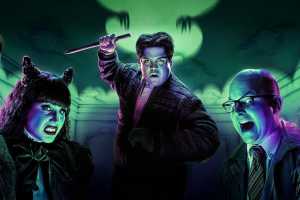 Now streaming on Showmax, this magnificently silly mock-doc series showed its teeth with eight Emmy nominations for Season 2, including one for Best Comedy Series and three for Outstanding Writing for a Comedy Series. It’s been hailed as “TV’s best comedy” by The Hollywood Reporter, among others.

WWDITS has been cooked up by two mad genius comedy masterchefs: multiple Emmy nominee Jemaine Clement (Flight Of The Conchords) and 2020 Oscar winner Taika Waititi (Jojo Rabbit, Thor: Ragnarok), who brought us the 2014 hit cult movie of the same name.

But while the vamps flap and fuss in the foreground, it’s downtrodden little Guillermo, Nandor’s familiar, played by Harvey Guillén (The Magicians), who swoops into the spotlight in the new season.

Despite Nandor’s neglect, Guillermo remained doggedly loyal throughout the first season, living for the day his master would fulfil his promise and turn him into a vampire. But of course, that was never going to happen.

Then, in the Season 1 finale, a DNA analysis revealed a horrifying secret in Guillermo’s ancestry: Van Helsing!

This season, the discovery that he’s descended from the famed vampire slayer sets Guillermo off on a whole new ass-kicking, vamp-staking trajectory. But don’t worry, Guillermo’s still Guillermo.

Feedback from the critics has been positive. As The Hollywood Reporter says, “Colin might be What We Do in the Shadows‘ most original character, but Guillermo, who may well have supplanted the vampires as the house’s most formidable being, has become the series’ wild card.”

Something else that’s got the fans and the critics excited this season is the guest list. Season 1 set the tone with the Vampiric Council, which included cameos from Tilda Swinton, Evan Rachel Wood, Dave Bautista, Danny Trejo and Wesley Snipes.

This season, look out for Benedict Wong (Doctor Strange, Deadly Class), Teen Choice nominee and Sundance Award winner Craig Robinson (The Office, Mr. Robot) and Greta Lee (Russian Doll, Inside Amy Schumer). Emmy-nominated comedian Nick Kroll is back as Simon the Devious, along with Clement himself as Vladislav, one of the original characters from the movie. And the showstopper is Luke Skywalker himself, Mark Hamill, a huge WWDITS fan.

What: What We Do in the Shadows