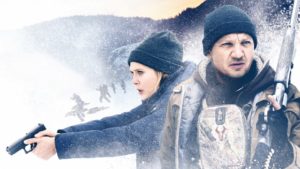 A finely sketched character-driven murder mystery, Wind River is a beautifully penned piece of work from Taylor Sheridan, who makes his directing debut.
Sheridan wrote Sicario and Hell or High Water, and here tells the story of marginalised people who have very little and even less power. What all three scripts have in common is well fleshed out characters (with some good casting) who carry the story.

On the face of it this film seems to be a chance for Jeremy Renner and Elizabeth Olsen to prove that they can do more than just play superheroes in a Marvel movie. But, it turns out to be so much deeper, and yes, also shows what fine, nuanced actors both are.
She plays an FBI agent despatched to an Indian reservation to determine whether a homicide has occurred. He is a tracker for the Fish and Wildlife Service who shows her the lay of the land.

Olsen plays her Jane Banner as someone who admits her lack of knowledge and experience and through her eyes we see the seemingly familiar Wyoming setting anew.
The film has a bit of a Western feel with its sweeping vistas. It shows that these people are on the edge of recognised civilisation and their very character is tested within this stark landscape.
Renner walks a fine line between outrage and grief. We get a glimpse into what feels like a very realistic take on the difficulties faced by the first peoples of the USA. In particular, the chilling, eye-opening realisation of just how little the US government cares.
Though the film paints a bleak picture the characters provide the emotional anchor and also the hope that things can change.
Both Olsen and Renner are understated. The moody soundtrack hits just the right note and even though the way the plot moves forward is predictable, you feel an emotional connection to the characters, which makes up for a lot.