Hats off to Wixworth Gin for launching an Anti Rhino Poaching Fund initiative in partnership with the Rhino Foundation.

Their drive to raise funds for the Stop Rhino Poaching Foundation was launched at Studio G Art Gallery at The Bay Hotel in Camps Bay on 2 April 2019.

This Wixworth Art of Gin showcase ties into the debut of the new Wixworth bottle, with artist Daniel Hugo being commissioned to curate a series of six Rhino paintings and a giant Rhino sculpture, for which all proceeds go directly to the STOP Rhino Poaching Foundation.

“Rhino poaching has reached crisis point and across the globe the Rhino habitat is shrinking drastically. Today three of the five species of rhino are critically endangered, with two of these species comprising less than 80 of its kind remaining in the wild” explained representative of the Rhino Fund, Elise Serfontein.

For each Wixworth Gin bottle sold a percentage of funds will also be allocated towards the rhino fundraising initiative.

“Together we can stop poaching and habitat loss, gearing towards a 20-year goal to save rhinos from extinction and rehabilitate the ecosystem” added MC, Craig Dore, Marketing Director at rgbc. 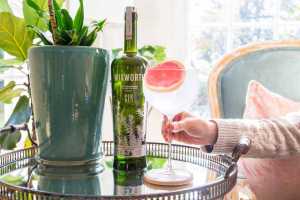 Wixworth is a finely crafted classic gin, balanced by a blend of the finest hand-selected botanicals. Its aroma stems from the union of warmth of spice and piny juniper, the vibrancy of citrus, and in the distance, the floral, earthy scent of fynbos-covered veld.

This is a truly South African gin, made with no artificial ingredients, no sweeteners and no colourants – comprising a hand-picked selection of local Fynbos and botanicals, including Rhino’s favourite snack – Renosterbos.