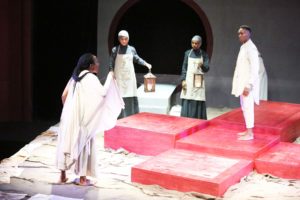 “If only I could make a child by myself”, is Yerma’s agonised cry. It’s the line wherein lies the core of Spanish dramatist’s Lorca’s tragic poem Yerma – a name meaning barren. Yerma (Cassandra Mapanda), after years of marriage is still childless. Not only does she ache for motherhood, she also hankers to join the laundresses round the village well. Both yearnings her insecure husband Juan (Mphumzi Nontshinga) appears incapable of satisfying, or willing to permit. 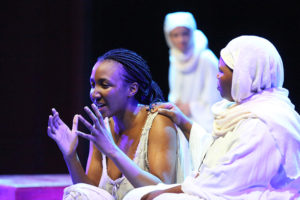 A hard-worker, Juan’s concern is village gossip. He assumes because he and Yerma have no children, Yerma will seek male company. To avoid this he brings his two sisters (Adam Lennox and Tevin Musara) to supervise Yerma’s every move.

As she grows more frustrated and obsessed about bearing a child, Yerma’s life becomes unbearable. She hates the sisters. Cannot sleep or eat. But although, she and childhood friend, Victor (Caleb Swanepoel) are attracted to each other, and Pagan Woman (Megan Theron) urges Yerma to bed her fertile son, Yerma remains honour-bound to Juan. “Do you think I can know another man?” she tells Pagan Woman.

In his cold, abusive way, Juan is also honour-bound to Yerma. The problem is their diabolically opposite ideas of what honour means. Neither listens, nor hears the other – not unusual. Except, in traditional Spanish rural society, where wives unquestioningly obey husbands and bear children, an independent spirited woman is an anomaly. An anomaly that can only lead to tragedy.

Yerma (translated into English in the 1950’s by Uys Krige) is one of Lorca’s most emotionally charged dramas. It can be seen as a cogent battle between pagan and Christian morals.  Yet despite her strong Christian beliefs Yerma undergoes a pagan fertility ritual. That scene, surrounded by mysterious chanting pagan women, and her nudity, drive home Yerma’s desperation to have her maternal instincts fulfilled. 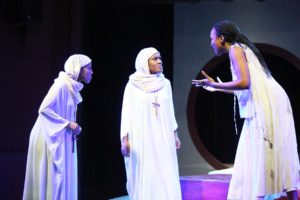 It’s therefore dishonouring Lorca’s drama, and his production, for director Geoff Hyland to treat the spinster sisters as “camp”, and for them to exaggerate eyes and body movements. They are sinister spies. Not comic characters for viewer’s amusement.