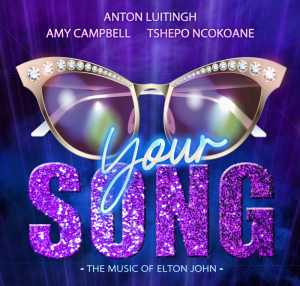 YOUR SONG. An Elton John Tribute. Performed by Anton Luitingh, Amy Campbell and Tshepo Ncokoane. Directed by Duane Alexander. Theatre on the Bay.

I managed to wangle a ticket to see this sold out show last night. Usually, I wouldn’t write a review for something that only has a few more performances left, and they are also all sold out (Covid-19 seating capacity requirements knocks theatre hard), but I can bet this show will have a return season, or two even, it is that good, and that accessible, and just all-round delicious entertainment.

Then Anton (the first Elton) kicks the show off, accompanying a hilarious voice over disclaimer by Christopher Dudgeon (I think), who is also responsible for writing the cheeky, tongue in cheek, why-on-earth-should-there-be-an-Elton-John-tribute show-now-in-South Africa, script.

Honestly, from the very first moment Anton Luitingh embodies Elton. Sometimes his vocal resemblance is so spot on it is creepily like he is channelling the man. I could not take my eyes off him and was instantly moved by his deeply connected performance. And such piano playing! He, bar one song, played piano for the entire show and it was brilliant. Then Tshepo Ncokoane and Amy Campbell arrived to give their millennial twist on the music and life of Reginald Kenneth Dwight, and they also blew me away. Tshepo is utterly gorgeous, and I loved watching him and listening to his sexy voice. Amy was a total revelation. She is magnificent. Her rendition of Goodbye Yellow Brick Road was indescribably good.

Your Song is about celebrating Elton John

Every song, every arrangement, every harmony, every solo is perfect, and I could have stayed for another hour, just listening, mouthing the words, nodding, and tapping along, and having a little cry every now and then.

The script is a leetle clunky and suffers a bit of overkill. Who cares about trying to make an Elton John tribute relevant? Certainly not last night’s mostly white (99%), mostly old with a peppering of young and gay, audience. The show is all about celebrating Elton John’s magical, amazing music and oh, yes, they do this, in buckets and spades.

As I am sure you know, tribute shows are not my chosen cuppa. But ones like this are a game changer. I could even see it again. What I couldn’t manage, however, were the audience members who spoke through the entire show, every song, as if they were watching Eurovision on TV. After interval, and a few tipples, they were worse. I got whiplash from turning around to glare, but they were so engrossed they didn’t notice. BUT. Let that not be my last word on this brilliant, slick, gorgeously simple, fantastically executed honouring of Elton John and his magical music.

Where and when: Theatre on the Bay until