Four powerful productions will be showcased at the first ever Zabalaza Season of the Best, Masambeni! at The Baxter in the Golden Arrow Studio from 7 to 18 September 2021. 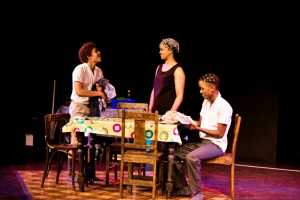 Selected from the main festival held earlier this year, for their powerful themes, writing, performances, directing and overall presentation, they are Heads or Tail(s)? (pictured left), Thank you for your Service, Blood on the Road and Ganga Nyoko! Inzima Nyoko!

Formerly known as Best of Zabalaza, this Season of the Best, Masambeni! will have morning performances at 10am and 11.30am and double-bill evening performances at 6.30pm and Saturday matinees at 2pm. Another innovation this year is the addition of surtitles, for all the productions. Performed in isiXhosa, Afrikaans, English and a combination of the languages, vital themes tackled include identity, self-expression, memory, childhood trauma, forgotten war veterans and gender.

Performances will be limited to a capacity of 50 audience members as regulated by lockdown Level 3 restrictions with all Covid-19 protocols in place and to be observed. 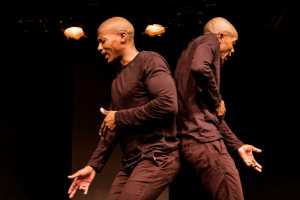 In Thank you for your Service (pictured right), a young man who followed in the footsteps of his father, has completed his service in the army and returns home to visit his family. Upon arrival he must deal with an ageing mother and a younger brother who has been sucked into gang life. Performed in isiXhosa and English, it deals with the trauma that soldiers and their families go through while in service, and how little the government offers them in return for their loyalty and patriotic deeds. As the winner of the Best Script award, the play text will be published by Junkets Publisher.

A young gay doctor returns to his village after his father dies. He tries to hide his sexuality from his childhood friend during their reunion. Ganga Nyoko! Inzima nyoko! shows what lengths he must go through to conceal his identity for his own safely. Performed in isiXhosa the poignant story exposes the pain and difficulties experienced by a community who just want to be their true selves and to be accepted. 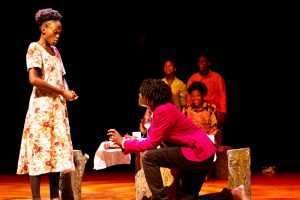 Blood on the Road (pictured left), examines how for every action there is an equal and opposite reaction. What happens when one suffers from the consequences of another’s reaction, when anger builds up because of the past and how easy it is to fake love when based on hidden agendas. Deceit and murder are underscored by traditional practices, culture and history, in this rich isiXhosa text.

Heads or Tail(s)?, performed in Afrikaans and English, delves into the life of a family torn by a secret, harboured by the mother. Her three adolescent children are battling to get the truth out of her. The twins Julia and Julian are desperate to understand how their father passed away when they were young, and their adopted brother wishes to be initiated. For this to happen he needs to reconnect with his biological family and ancestors. Everyone has questions that will connect them to their identity and culture, but on which side of the coin will the truth land, Heads or Tail(s)?

What: Zabalaza Season of the Best, Masambeni!

Where and when: The Baxter in the Golden Arrow Studio from 7 to 18 September 2021