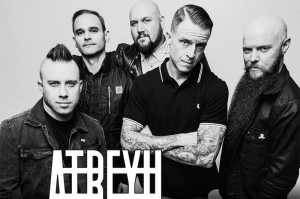 Pirate Fest and The Final Quest promise some awesome loud rocking. Leading up to the festivities, PAUL BLOM chatted with Dan Jacobs, guitarist and backing vocalist of American band Atreyu.

On 7 September 2019 South Africa’s timbers will get shivered with the landing of the Pirate Fest live music and themed lifestyle festival! International metal acts Atreyu and Alestorm will invade together with local acts FuziGish, Tweak and Hellcats, with MC Rob Van Vuuren.

Other lifestyle attachments to the event includes a cosplay segment, a vast food court and more. This Pirate Fest location will be Marks Park Sports Club in Randburg. Get Pirate fest tickets here.

But two days before on 5 September at Mercury Live, Cape Town will experience The Final Quest with Atreyu live on stage, supported by local acts Zombies Ate My Girlfriend, Treehouse Burning and Set For The Sky. Mercury Final Quest tickets.

How excited are you to come to South Africa?

We’re really excited, man! With 20 years of the band this is the first chance we’ve had to come out to Africa and play for everyone – we’ve always wanted to do this. Our bass player Porter has been, I think to Nigeria – a little more way off in the bush with tribes.

What were your thoughts when you were asked to play a Pirate Festival in SA?

It was the perfect scenario – our first time in Africa to play a pirate festival? It sounds perfect!

We have no idea what to expect, except maybe half the audience will be wildlife!

Were you aware that there is a concentrated, but dedicated metal following in SA, with fans and bands?

Not really no.  But I’ve seen some footage of festivals, so there is a desire for live music out there – So we’re excited to come down and add to that, and be a part of it. I don’t know of any SA metal bands – South Africa is kind of the wild unknown to us – we don’t really know much about the music scene there. So for a band like us who’ve been all over the world, deciding to go somewhere where things are fresh to us, exciting, different and new – We can’t wait!

Where did your music journey start and how did it bleed into the heavier side of things?

I started out listening to stuff from the ’50s and ’60, the kind of stuff my parents had on the radio. From there I started digging through their vinyls and listening to whatever I could get my hands on in there.

In the ’90s I got turned on to stuff like Green Day, Nirvana and Stone Temple Pilots.  Around the same time I ran into a buddy who played drums and it kind of inspired me to play guitar, and jump on the band train. So early on we tried to sound like Green Day and then as the years went on it got a bit heaver, going from harder Punk which turned into Hardcore, which lead into Metal – and it all came full circle.

In SA you’re unlikely to make a living playing alternative music genres – How often do you feel worried about the sustainability of what you do?

Luckily for a band like us, we’re a hard working band and we’ve been doing it a long time. We got to ride some waves, we’ve had ups and downs in our career – So we kind of see the big picture and we know what works for us, and how to keep moving forward and how to stay relevant, keeping it fresh.

Did you experience a pre-internet and social media era when it comes to band promotion?

Oh yeah, we started touring even before cellphones were really a thing yet.  For tours we had to print off the direction of maps and follow directions to try and get from show to show in our van, which was pretty crazy.  I’m sure most bands wouldn’t be able to tour today if they had to get around like that.

What do you love and hate about the music industry from how it was back then, to how it is today?

What I loved about back then is that bands were less accessible – it made it a bit more enticing – It made things more exciting, and made things harder to get.  Now you can literally direct message anyone from a band, even the president! – you can get hold of anybody so easily.

I mean there’s benefits to that, making someone feel less far away, and more human. But at the same time I also feel it hurts things – making bands not seem larger than life anymore – something that’s missing form the music industry to an extent: the classic rock star, you know? There are not too many people that have that anymore – it’s kind of tapered off.

For someone who has no idea what metal is, how would you describe it to them to pique their interest?

It’s an audible roller coaster – there are highs and lows, it can get really calm and mellow, and can take you on a  wild ride. It’s exhilarating. It’ll get your emotions going, get your energy pumping.  It’s probably one of the most exciting forms of music you can listen to because of how much energy it has, and how intense, emotional and passionate it can be.

How often do you encounter metal elitists and how do you deal with them?

Honestly, nowadays we’ve just learned to ignore it.  It’s one of those things, you can feed into it, sit on-line all day and look for people saying negative things about your band and try to argue with them. People like that are just looking for attention and by responding you’re pouring fuel on their fire.  So we just ignore that stuff.  There’s no point in fueling negativity.  If people write positive things we’ll respond and interact.  If negative things are sent our way we just delete and ignore it, there’s just no point.

I guess they’re two different beasts – I like playing live because you get the energy of the crowd, which is incredible because it is such an in the moment thing. It’s never the same thing twice, unpredictable, there’s just such an incredible thing about performing, especially if its your own music and people are singing along and reacting to it.

Live things are scripted and not much happens by chance, the setlist is made, transitions are practiced and rehearsed to make sure everything flows nicely.

Then the album you have one shot to make it sound the way you want before it goes out, so there’s that element of creating, getting in that zone and hearing stuff in your head and taking it out of your head and putting it into an audible form.  It’s a fun ride – it’s a really interesting scenario to be in, feeling music come together and helping create it.

I like them both the same, but for different reasons.

What has been the band’s biggest transformation / evolution across the various stadia of your career?

On our album Lead Sails Paper Anchor it was the first time we worked with John Feldmann – producers before that kind of got the gist about what to get out of a band as far as song structure goes and song writing. That was something we already knew and honed a bit more.  But it wasn’t until we worked with John – he said ‘look guys, let’s take what you’re doing and put it on steroids.  Let’s take it to the next level and make it sound even bigger than what you’re already doing’ – whether it’s the song structures that we were using, the way we wrote choruses, the way we used to put things together with our instruments and our voices collectively – he just created a bigger sound than we ever had and it took our band to another level.

On our last record we worked with him again – out of all the producers we’ve worked with, he’s been the most noticeably helpful in taking our sound and getting it to be as big and we’ve been wanting it to sound.

Has metal production gone off the edge, or can it still be pushed?

At this point technology may have pushed it as far as you can go, while still having it be digestible. I mean the drumming and blast beats are so fast, and having it be precise and the same velocity, it’s just a crazy thing. Anything past where we’re already at, especially drums, and even guitar playing, you can only get so fast and technical where it can get undigestible to humans and be too chaotic  and hard to latch onto.  I think not just Metal, most musical genres has pushed itself as far as it can go in every direction. It’s now just a matter of juggling and balancing what’s already there and learning from what works the best over the years and honing that in stead of just pushing the extreme.

What can your fans expect after Pirate Fest?

We’ll probably start working on another album, as soon as we’re done jump back in the studio and start writing again, and just keep the party going!