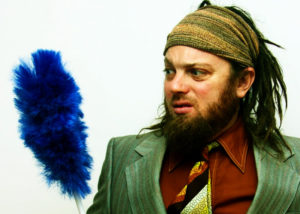 Australian comedian, Fabien Clarke will be the guest act at The Cape Town Comedy Club on Wednesday 19 and Thursday 20 July. The winner of Adelaide Comedian of The Year 2013, Fabien Clark is a stand-up comedian with a gift for storytelling. He’s also a self-described “hippy and bogan”.*

A regular on the Adelaide comedy scene since 2004, he has performed his comedy at festivals and clubs all over Australia. He has performed solo shows at the Adelaide Fringe, Perth Fringe World, and Melbourne International Comedy Festival. His 2016 festival show Fabien Clark – The Walking Dreads won the highly coveted Weekly Award for Best Comedy at the Adelaide Fringe Festival. Fabien has also featured as a guest host on Perth’s mix 94.5 breakfast show Clairsy and Kymba and appeared on the Comedy Channel show Stand-up Australia.

Where and when: Cape Town Comedy Club on 19 and 20 July

* The term bogan is a derogatory Australian and New Zealand slang word used to describe a person whose speech, clothing, attitude and behaviour exemplify values and behaviour considered unrefined or unsophisticated.