Diggstown follows Marcie Diggs (Vinessa Antoine), a star corporate lawyer who reconsiders her priorities after her beloved aunt commits suicide following a malicious prosecution. The team of lawyers that Marcie works with are a curious band of do-gooders, cynics and scrappers – people struggling to keep personal disappointment and demons out of their practice. They work directly in the community to find justice for their diverse clients, exploring issues of racism, poverty and gender bias.

Leading the cast is Vinessa Antoine, who has starred in various TV show,s including Being Erica, Haven, Heartland, NCIS, Lucky 7 and General Hospital. She has also appeared in several Off-Broadway plays in New York, including the original New York cast of Four.

Family Law follows lawyer and recovering alcoholic Abigail ‘Abby’ Bianchi, who is struggling to put her career and family back together after hitting rock bottom. As a condition of her probation, Abby is forced to work at her estranged father’s firm and practice in family law for the first time, alongside the half-brother and half-sister she’s never met. As Abby likes to joke, it’s one dysfunctional family helping other dysfunctional families. 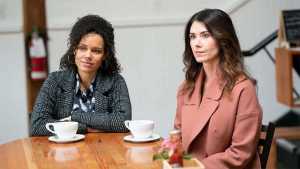 Abby is played by Gemini Award nominated and Leo Award winning actress Jewel Staite. Staite is best known for her work as Kaylee in the Firefly series, as well as the feature film adaptation Serenity. Most recently, Jewel was seen on hit series The Good Doctor, Blindspot, The Magicians and Legends of Tomorrow.