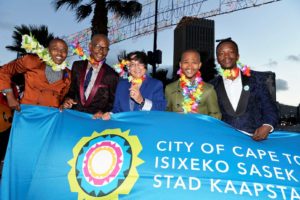 DJ Ready D, Heavenly Quartez, and members of The Rockets (who are celebrating their 50th anniversary) joined City of Cape Town’s Executive Mayor Patricia de Lille to ‘test switch-on’ the festive lights on Adderley Street in preparation of the holiday season.

These artists also form part of the line-up set to wow Capetonians at the Cape’s biggest, free open-air event on Sunday 3 December,  2017 from 4pm. Each year thousands of Capetonians and visitors enjoy the celebration.

The Grand Parade and surrounding streets will be energised by a music acts, ahead of the eagerly awaited illumination moment at 8.30pm. The concert will end with a spectacular 3D video mapping display. As always, the first crossing in Adderley Street will carry a brand new light attraction that this year will spark the 2017 theme: Cape Town celebrates summer.

The festive lights switch-on is one of the highlights on the city’s annual events calendar, as it’s a great family occasion for young and old to enjoy.

Rounding out the line-up will be the winners of the City’s Festive Lights Challenge music video competition, now in its second year. Chosen by Capetonians through an online public voting system on Indi.com, the winning up-and-coming artist or band will perform at the festival on 3 December and also receive a R10 000 cash prize. Entrants need upload a performance video via the indi.com mobile app and share it to their social channels. The more votes the entrant gets, the higher their standing on the ‘buzz meter’. The artist with the most ‘buzz points’ will be crowned the winner. The Festive Lights Challenge is on until 28 November, 2017. 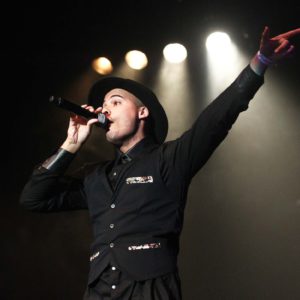 Jimmy Nevis also features in his own concert, 2524, at GrandWest, on Saturday, 25 November which will see Nevis perform new singles from his third studio album and will include special guest performances.

Jimmy Nevis released the first single from his third album, Quarter Life Crisis, in September. Titled Ballin’, the track was written by Nevis and co-produced by Sketchy Bongo.

The two artists – who collaborated on the 5FM Sony Xperia Mash Lab in early 2016 – decided to work together on the single, which Nevis claims acted as the muse and inspiration for the rest of the album.

“The song is about living your best life,” says Nevis. “It’s all about being fearless!” Noting that he’s always been extremely vigilant of himself when writing songs in the past, this album Nevis opted to freestyle a lot whilst in studio. “For me this has been a whole new way of creating music and it feels so right, and I definitely think it comes across strongly in Ballin’.”