The Idols Top 4 2018 have made it through to the next round, and the end of the competition is in sight. Who is going to win? 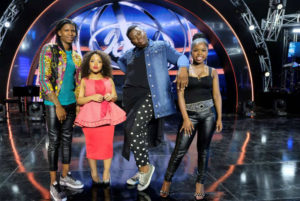 The evening may have started off on a sombre note when Proverb paid respects to his friend and Motswako rap pioneer, Jabulani “HHP” Tsambo, who passed away earlier this week; but the divine spirit soon took over the State Theatre when Dr Rebecca Malope took the entire Mzansi to church!

The gospel superstar enlisted the help of the Top 5 to lift the country’s mood with her hit hymn, Moya Wam, backed by the multi Grammy Award-winning Soweto Gospel Choir.

The reverence continued for the first round with the Soweto Gospel Choir as the contestants each performed a gospel-themed song. Thato was up first with Jimmy Cliff’s Many Rivers to Cross. The poignant tune received rave reviews from the judges, with Randall predicting that Mzansi will see him in the finale.

Thando’s name was called next, and she blessed all with the Soweto Gospel Choir’s own Ke Na Le Modisa. “See what happens when you have fun!?” Randall exclaimed, adding: “We’ve been waiting for you to enjoy yourself!” Unathi finished off with: ““Wooooow! You had character, you had charisma; you were in your element!”

Yanga came on with a medley of Avulekil’Amasango/One Love from the Soweto Gospel Choir. The performance left Somizi speaking in tongues. “Hallelujah!” Randall complemented her, and the rest of the contestants, on stepping up her game; and Unathi called her “amazing”.

It came down to Niyaaz and King B to complete the Top 4 and Mzansi voted to keep the teen from Kagiso for another week, saying goodbye to Cape Town’s Niyaaz. King B gifted Mzansi with a powerful rendition of Lebo Sekgobela’s Lion of Judah that had Unathi and several audience members in tears. “You got the first cry this season, so you’ve done something right,” was Somizi’s assessment. Randall simply called his voice “remarkable”.

The second round kicked off with a quintessential Dr Ribs performance that saw her shake the stage with the Soweto Gospel Choice and performing her signature move of “wiping the floor”. Then the Idols Top 4 2018 took over.

Thato took things continental when he stepped on stage singing Davido’s monster hit, If. The judges again gave him a unanimous thumbs up, with Unathi calling him “magnificent” and Randall praising his “versatility and consistency”. When Somizi voiced his faux-disappointment at not seeing some skin action, Thato awarded his fans a peek of his abs. “Your fans all over the country are now happy!” laughed the judge.

Thando’s second song was Thando by Naima Kay. Somizi shared that last week’s guest judge, Matthew Knowles, had called her “the queen of ballads” and advised her to stick to the genre. “You are a powerhouse!” he declared.

Yanga kept it local with Sjava’s Impilo, which the judges found faultless. Randall’s only advice was: “Next week is going to be a tight and extremely difficult show. Every song will have to be absolutely stand-out to get to the final.” Unathi said she had “no doubt” the youngster will be in the final, and Somizi’s forecast was that she was going to be a superstar, whether she wins or not.

King B closed the show with Kahle by Amanda Black. Unathi called his overall performance “well rounded and balanced” and Somizi begged for more colour and happiness from him next week.

With the final just around the colour, the contestants are bringing their A-game on stage and hoping their fans bring their “thumb game” to the voting battle. Do best to see your fave make it to the Top 3!

Where and when:  Mzansi Magic, DStv Channel 161 on Sundays at 5pm