We have an Idols winner 2018!! After several emotional and gruelling months of sweat, tears and music, a star is born! 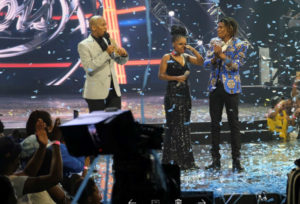 The race between Yanga and Thato came to a dazzling conclusion when 17-year-old Yanga snatched victory to become South Africa’s next superstar.

Mzansi collectively held its breath as millions of eyeballs trained on host Proverb, crossing fingers for their favourite to be named the SA Idols Season 14 winner. Yanga, who becomes the second consecutive teenage girl from the Western Cape to win the title after last year’s Paxton, becomes an instant millionaire thanks to a staggeringly awesome prize package that includes a record deal, car and a myriad of other glamorous prizes.

“I can’t put into words how I feel right now, but I can say it in song,” said a shell-shocked Yanga a few seconds after her name was called, before bursting into a gratitude chorus.

Her runner-up, Thato, gave her a warm congratulatory hug and thanked Mzansi for the immerse support. And what support South Africa has shown, with a season record of 142 million votes, surpassing the targeted 100 million that Proverb had set in the beginning of the season.

After gruelling months of sweat, blood and tears, tonight was a two-hour celebration of a great season that saw some of the youngest contestants on the Idols stage in a while. 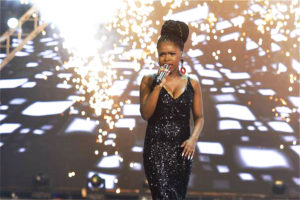 The show pulled out all the stops to bring Mzansi Magic viewers and the full house at Carnival City’s Big Top Arena a music spectacular. There were pyrotechnics, motorbikes, a jungle feel, protests, a riot of colour and a glimpse of an Africa reimagined.

The performer roster read like the who’s who on the hot list, kicking off with an Afro-futuristic group performance by this season’s Top 10, host Proverb and judges Randall, Somizi and Unathi singing Greatest Show and Never Enough.

DJ Black Coffee brought his international brand on the Idols stage with Wish you were Here feat. Msaki, while DJ Tira ft. AKA, Okmalumkoolkat and Prince Bulo kept everyone on their feet with No Rush.

AKA came back with a medley of Fela in Versace and Jika, with Plaak by Kid X and Vur Vai by Kwesta keeping the hip hop heads enthralled. Mlindo The Vocalist also graced the stage accompanied by Kwesta, Thabsie and Sfeesoh for Macala.

Last season’s victor, Paxton, served sass with her spicy single, Angifuni, which has been blowing up on YouTube with over a million views and counting.

The two finalists debuted the videos for their first original singles, featuring various Ford cars. They also performed their Showstopper week songs and collaborated on the duet, Dusk till Dawn by Zayn and Sia.